The Winners and Highlights of AngelHack Manila Spring 2014 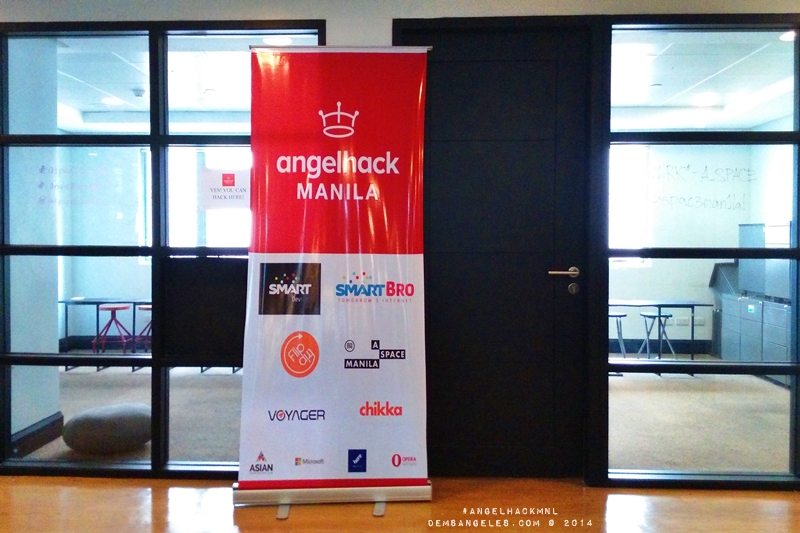 Over a hundred developers and designers spent the weekend hacking their way at A Space Manila in Makati City.

For the second time, thirty-six (36) teams did some serious “Eat. Hack. Sleep.” at AngelHack Manila Spring 2014!

Tagged as the world’s largest hackathon series, AngelHack organizes hundreds of hackathons (coding marathons) in over 30 cities for developers, designers, and entrepreneurs. As stated in their website:

Winners from every city are put through the AngelHack Accelerator Program, where we mentor them for 12 weeks before bringing them out to Silicon Valley to raise investment and introduce them to incubators.

Previous winners have gone on to attend Y-Combinator, AngelPad, TechStars, 500 Startups, and incubators around the world.

After two days of hard work and three-minute close door pitch to a set of three (3) judges per room, in no particular order, the top 12 finalists were: sigurado.co, Who’s Your Nanny (Who’s Your Nanny?), Bitwards (SourceScript Innovations), Pasa Net (Pasanet), Hackerstats, Quotable (Quotable), Baryable (PhilRobotics), Loop Lisa (Team Divided By Zero), sc.io (BluLemons), Goob (Goob), Tusk (Instigators), and BayaniStream (Bayani Stream). One after another, these teams did another pitch in front of all the judges.

Team Quotable, comprised of Luigi Dollosa, Riela Isabel Antonio, Jay Saringan, and Marlo Lao, won first prize. Their ‘Quotable‘ app aims to “helps you save, curate, and share notable lines that you read on the web.”

All in all, it was a fun learning experience. I’m happy for non-winners who have also gotten attention from mentors and investors interested to further develop the applications. Congratulations everyone! I’m excited to see how far your projects will go. 🙂

Hack in comfort and style!

Hack in comfort and style!

Some of the sponsors 🙂

Next up: WebGeek DevCup! See you on August 16-17, 2014 at the Meralco Multi-Purpose Hall, Ortigas, Pasig City.