PH students off to compete in Beijing robotics olympiad 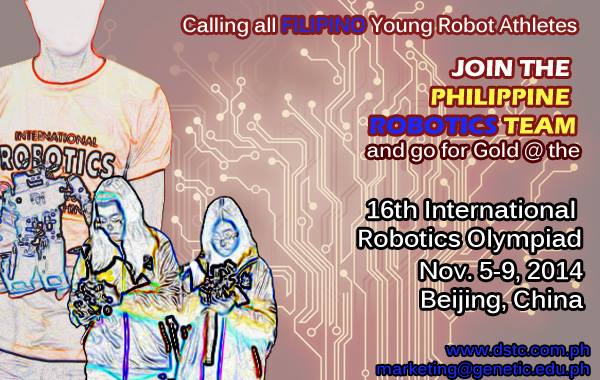 Forty (40) delegates will represent the Philippines in the 16th International Robotics Olympiad Competition (IROC) in Beijing, China this November 5 – 9, 2014.

Pinoy Robot Games Foundation has been sending delegates to IROC since 2007. These delegates were champions of the National Robotics Competition (NRC), a local annual competition where more than three hundred school teams participate.

In the press and bloggers conference held at Oakwood Premier Joy-Nostalg Center in Pasig City, part of this year’s delegation to the 16th IROC was presented to the media. First up is the winners of 2014 National Robotics Competition last January from Grace Christian College, composed of Ana Isabelle Chua and Kimberly Gamboa.

It is sad to know that the students and their parents shoulder the expenses in order for them to fly out and participate. But through the generosity of Data Science & Technology Corporation, their trip will be sponsored including travel and accommodations, robot kits and software they will be using during the competition.

What happens in an international robotics competition and how to prepare?

The 16th IROC theme revolves around “stop global warming”. The students will build their robots and code them from scratch on-site. This is a product of their long preparation that involves a lot of research, coming up with a solution and designing robots to execute those. Once they are prototyping, they have to dismantle and built it while timing themselves.

The students can only join a maximum of three events as 12 – 15 events take place over the course of three days, with four or five events happening simultaneously per day. Competition categories include sumobot, line tracing, mission challenge, break-out, humanoid challenge, and robo-soccer. The fourth day is for social gathering and awarding.

Apply as part of the delegation

Interested schools can apply to send in their delegates as part of the Philippine Robotics team for the 16th IROC. Application process and forms found here.

Join us in cheering for our Philippine team! Best of luck and make us proud! To God be the glory!

About Data Science and Technology Corporation (DSTC)
DSTC, in partnership with Pinoy Robot Games, is the strong support that makes possible the holding of several Robot Camps, Regional Qualifying Rounds, National Robotics Competition (NRC) and the Philippine Team to the International Robotics Olympiad (IROC). It has been continuously providing the Philippine schools with the best technology solutions for education. Visit their website and Facebook page.