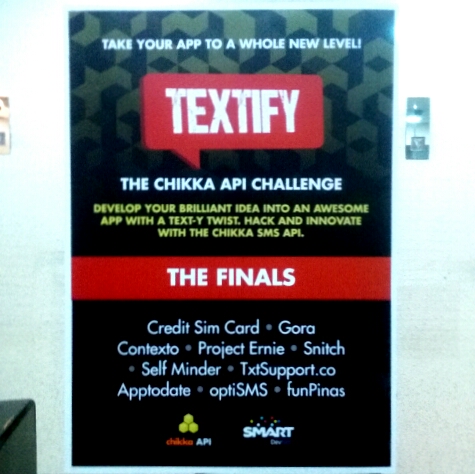 An online hackathon that highlighted the use of a recently launched SMS API concluded last November 22.

TEXTIFY is a developer challenge organized by Smart Developer Network (Smart DevNet) and Chikka Philippines, a subsidiary of Smart Communications.

Ten (10) teams namely Funpinas, optiSMS, Snitch, ApptoDate, Gora, Contexto, TXTSUPPORT.CO, Credit SIM Card, Project Ernie and Self Minder made the cut and were able to present their apps in front of a panel of experts.

Each entry was scored based on market relevance, business viability and how they made full use of the Chikka SMS API.

Bagging the grand prize is Team Super Heroes in Training, comprised of Jairus Bondoc and Sarwar Faruque with their application TXTSUPPORT.CO. They take away P50,000 in cash, P25,000-worth of Chikka API credits, and other prizes.

The rest of the photos can be found here.