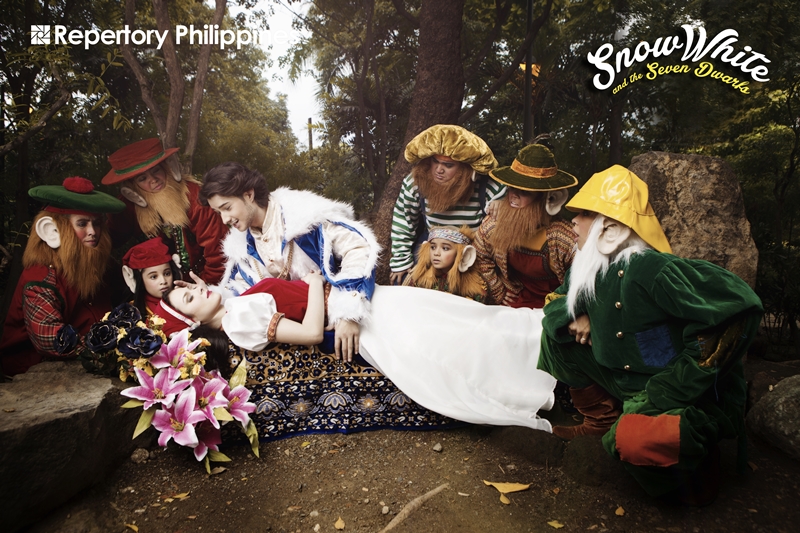 I cannot recall exact when I have watch Repertory Philippines perform during my school years but ever since I have watched 4,000 Miles a few months ago, I have been looking forward to their next production. And this time around, one of my favorite fairy tales! <3

Who doesn’t know the classic fairy tale that got little girls looking at the mirror while asking, “Mirror, mirror on the wall, who is the fairest of them all?”.

Repertory Philippines brings yet another masterpiece to life – the classic story of Snow White and the Seven Dwarfs. The live musical performance follows that of the Disney version with her own twists through song choices, dialogue, staging and choreography that will surely delight kids and kids at heart!

Thank you .@repphils for your wonderful interpretation of #SnowWhite <3

The Evil Queen disguised three times: as an old peddler who ties a silky

bodice onto Snow White, as a comb seller and gives Snow White a

poisoned one, and as a farmer’s wife who gives a poisoned apple.

Snow White and her Prince <3

CAST OF CHARACTERS (in order of appearance)

There’s nothing more to say about the brilliant performance of Christine Flores, Butuin Escalante and Hans Eckstein, the entertainment brought by the actors who played the Seven Dwarfs, the graceful ballet dancers and the beautiful set design. But can somebody please tell me how they made the magic mirror so cool? 😀

Mirror, mirror, on the wall~

If there’s anything you can learn from watching Repertory Philippines’ retelling of this classic fairytale:

There’s so much more I want to say but I don’t want to spoil it for you so yodel your way to the Onstage Theater, Greenbelt 1, Makati City! The show will run until December 10, 2015. Call TicketWorld at 891-999 for tickets or book via www.ticketworld.com.ph.

Snow White and the Seven Dwarfs is part of the Repertory Theater for Young Audiences and is directed by Joy Vitara with musical scoring by Michael Valenti and adaptation by Elsa Rael.

All photos from Repertory Philippines.