[Film] Your Complete Guide to the 10th Spring Film Festival 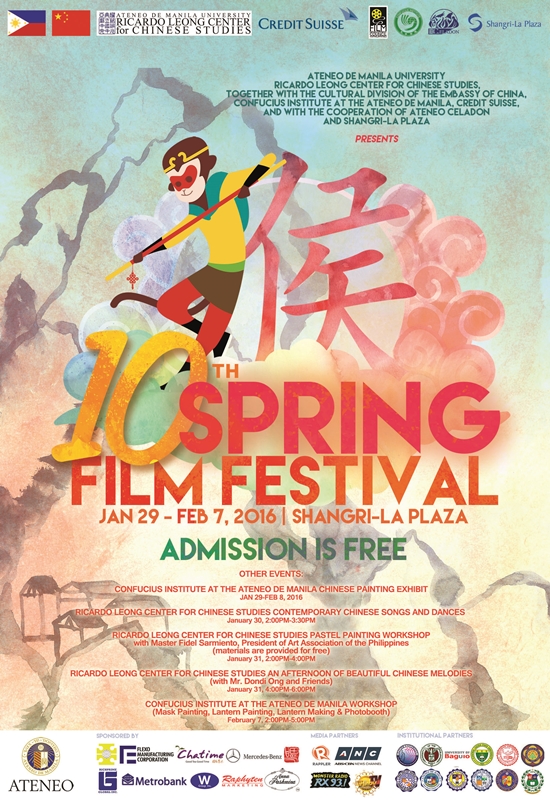 Celebrating the rich heritage of Chinese culture and arts in time for the Chinese New Year, leading lifestyle destination Shangri-La Plaza hosts the highly anticipated 10th Spring Film Festival on January 29 to February 7, at the Cinema 4 of the Shang Cineplex.

The Ateneo de Manila University’s Ricardo Leong Center for Chinese Studies together with the Cultural Section of the Embassy of the People’s Republic of China, Confucius Institute, Film Development Council of the Philippines, and Credit Suisse, and with the cooperation of Ateneo Celadon and Shangri-La Plaza, has put together a wonderful roster of films that aim to encourage further appreciation of Chinese language and culture in mainstream Philippine society.

Marking its tenth year, the Spring Film Festival has carefully selected 10 of the best Chinese films for audiences to enjoy.

Adapted from the real-life experiences of an 8-year-old Italian girl, Angel Vera (Cultural, Social Drama / 80 minutes) traces her journey and struggles to realize the dream of becoming a Beijing opera performer.

In wartime Guangzhou before the country’s liberation by the Communist Party of China in 1949, Qiu Xi (Action, Drama, Romance / 102 minutes) makes her living as a Tanka or boat person. She lives in the coastal area of Guangdong Province. In the midst of all difficulties, she finds herself falling in love with an undercover communist agent working for the Kuomintang regime.

Wild Horse from Shangri-La (Drama / 83 minutes) is the story of Geza, called the “wild horse” of his village on the Tibetan Plateau. When his sister falls desperately ill, he decides to compete in a marathon and pay for her operation with the prize money. But first he must run across China to get to the starting line.

Period drama East Wind Rain (Dong Feng Yu / Drama / 115 minutes) set in 1940s Shanghai revolves around the spy An Ming, who secures information on Japan’s intended attack on Pearl Harbor, and his dangerous mission to deliver this to the appropriate authorities.

At that Summer tells of the unlikely love story that blossomed between a kind young man and pregnant girl abandoned by her lover.

Retired bus driver Ge’s life hasn’t gone as he imagined it would – his son by a first marriage doesn’t speak with him, and he has been forced out of his own house. In Full Circle (Drama / 105 minutes), he finds hope again thanks to a bunch of rebellious senior citizens living in a nursing home.

The rambunctious sequel to Raymond Yip’s Lost on Journey, Lost in Thailand (Adventure, Comedy, Drama / 105 minutes) traces the rivalry between two ambitious business managers in competition for a revolutionary new technology, and the outrageous comedy of errors that resulted from this obsessive quest.

Back to 1942 (Drama / 146 minutes) reveals the story of a North Henan landlord who embarks on a pilgrimage to Sha’anxi province during the 1942 famine, struggling to survive as war with Japan looms on the horizon.

In Say Yes (Romantic Comedy, 101 minutes), an odd partnership develops into a meaningful pairing as two unlikely individuals find their perfect match in each other.

All films will be shown with English subtitles.

There will also be performances of Chinese songs and dances by the Ricardo Leong Center for Chinese Studies on January 30, 2:00pm, and on January 31 at 4:00pm at the Grand Atrium.

Art lovers and enthusiasts will also get a thrill from the different arts and crafts activities lined up at the Grand and East Atria. The Ricardo Leong Center for Chinese Studies will host a painting workshop headed by Master Fidel Sarmiento, President of the Art Association of the Philippines on January 31, 2:00pm, at the Grand Atrium while the Confucius Institute at the Ateneo de Manila University will hold their annual Chinese mask-painting and lantern-making workshop on February 7, 2:00pm, at the East Atrium.

The 10th Spring Film Festival will run simultaneously with a Chinese Painting Exhibit from January 29 to February 8, with works of students from the Confucius Institute at the Ateneo de Manila University on display also at the Grand Atrium.

Finally, the Shang will officially welcome the Chinese New Year with the dragon and lion dance exhibition at the Grand Atrium on February 14, 4:00pm.