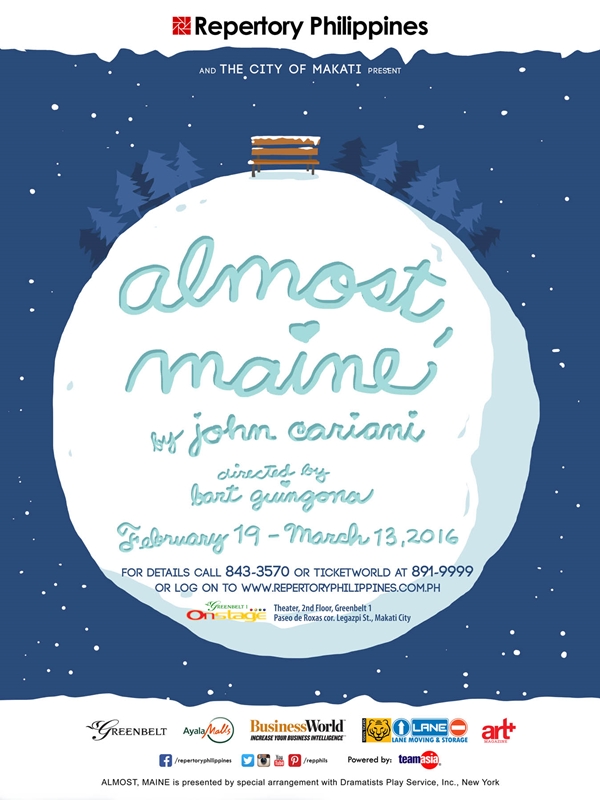 ALMOST, MAINE is a mythical place, owing no real geographic reference except to the human heart.

It is cold bleak landscapes, difficult to live in, and even harder to endure, but somehow the people that inhabit this place still manage to fill it with warmth, love, friendship and hope. It is their emotional journey that makes this place, located in the loneliest and most solitary corners of our hearts, still a place worth living.

Written by John Cariani, ALMOST, MAINE is one of those endearing plays that captures your imagination almost immediately, and never let’s go. With 19 characters played by a cast of only four people, it is most definitely an actor’s piece. Two men and two women playing a host of complex characters is a daunting task indeed, and after several rounds of auditions and readings, the actors were finally found.

In the end, Reb Atadero (The Graduate, The Horse And His Boy) Caisa Borromeo (The Secret Garden, Kung Paano Ako Naging Leading Lady), Natalie Everett (The Secret Garden, The Game’s Afoot) and Jamie Wilson (Run For Your Wife, The Bridges of Madison County) were chosen to take up the acting chores.

All veterans of Repertory Philippines, the excitement at being cast in ALMOST, MAINE quickly overshadowed the hard work that would soon follow.

In the director’s chair, another Rep veteran takes the helm. Always an artist of incredible vision, Bart Guingona (4000 Miles, The Normal Heart) has never been one to do a play as it is written, and has put his own twists and turns on this wonderful material. With stage design by Baby Imperial and Coco Anne, lighting by John Batalla, sound design by Jethro Joaquin and costumes by Marta Lovina, ALMOST, MAINE promises to be a strong offering in Repertory Philippines’ 2016 season. ALMOST, MAINE opens at the Onstage Theater in Greenbelt One, Makati on February 19th.