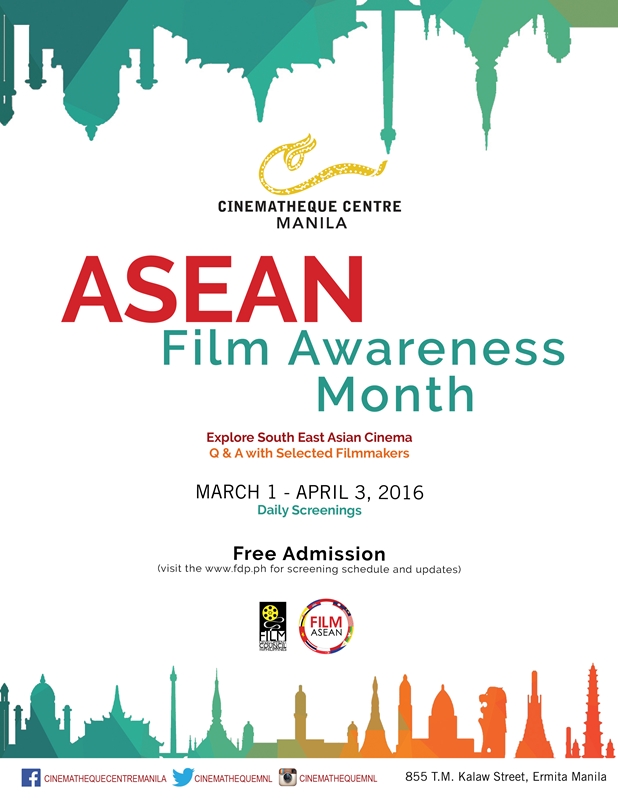 Audiences can expect to be treated to the best of contemporary South East Asian cinema, as the selection of screenings from all over the region brings together the values, traditions and cultures of the diverse ASEAN people and paints a picture of their collective ASEAN identity.

Brunei’s entry, What’s So Special About Rina (“Ada Apa Dengan Rina” / Comedy / 90 minutes), is directed by Harlif Mohamad and Farid Azlan Ghani. The comedy follows the struggle of a 30 year old man looking for Rina – a mysterious woman he is supposedly destined to marry. This film is culturally significant because its characters speak in Brunei Malay – the first time the dialect has been used on the big screen. In 2013 it won Best Picture and the Special Jury award at the ASEAN International Film Festival & Awards.

The Indonesian filmmakers include five films in the selection. First is Ody Harahap’s When Will You Get Married (Comedy, Romance / 115 minutes) which has a single woman in her 30s as its main protagonist. Although she is successful in her chosen career her family considers her a failure as long as she remains unmarried. To escape their scrutiny she hires an actor to pretend to be her boyfriend which produces hilariously odd scenarios.

In the coming-of-age film Filosofi Kopi (Drama / 117 minutes) by Angga Sasongko, two best friends are in the quest to keep their coffee shop out of debt while also hoping to create the best cup of brew. In juggling these goals they learn more about themselves and the values they hold dear.

We Are Moluccans (“Cahaya Dari Timur: Beta Maluku” / Drama, Social Issues / 151 minutes), was filmed by Angga Sasongko. In a remote island, a hopeful coach organizes a soccer team so that the youth will be distracted from the ongoing religious conflict. The Maluku team, made up of both Christian and Muslim boys, unites the natives of the island in their desire to see their children succeed.

Noy, a medical school graduate, is pressured to marry his beautiful wealthy girlfriend Above It All (90 minutes). When he can no longer deny and hide his sexual preference, he risks the consequences to tell his parents the truth.

Hailing from Laos is Chanthaly (98 minutes) by director Mattie Do. An eerie film about a young girl experiencing visions of her dead mother.

I Love You (120 minutes) is by filmmaker Thavisack Thammavongsa about a Laotian woman who wishes to open her own store. When her rich father recommends she find funding elsewhere, circumstances collide to orchestrate a life-changing meeting between her and a self-sufficient farmer.

Malaysia contributed three films. Nova (Comedy, Drama, Sci-Fi / 109 minutes) by Nik Amir Mustapha is a fun film about a group of school friends on the trail of a mysterious UFO. The filmmaker of the group aims to document their zany road trip. What ensues is a playful mash up of the genres of comedy and science fiction. The film was a contender in the Asian Future Category at the 27th Tokyo International Film Festival.

Another Malaysian film to look out for is The Journey (Comedy, Drama, Family / 110 minutes) of Chiu Keng Guan. It begins with a conservative father who refuses to give his blessing to his daughter and her fiancé from abroad. He is swayed once his future son-in-law agrees to hand deliver each wedding invitation with him. On the road, the two men learn about each other and open up to bridging their cultural differences.

Featured from Myanmar is U Htun Kyi’s rare work, Successor of Merits (149 minutes), the story of a young boy who wants to join a Buddhist monastery against his parents’ wishes. The film showcases Myanmar’s rich religious traditions. Aung Ko Latt’s Kayan Beauties (93 minutes) also represents Myanmar. A mysterious story of Kayan women who leave their remote village only to have one of their members abducted into the trade of human trafficking.

Singapore has two entries included in the ASEAN Film Awareness Month. The first is My Beloved Dearest (“Sayang Disayang” / Drama, Family, Musical / 109 minutes) about a homesick domestic helper who struggles to relate to her bitter retired employer. A tender story about how two broken hearts find solace in one other. The film won the Best Asian Film (Jury Prize) at the SalaMindanaw International Film Festival in 2013 and Best Feature at the 12th Royal Bali International Film Festival.

Another Singaporean entry is 7 Letters (Drama / 110 minutes), an omnibus assembled by 7 different directors as an homage to the 50th anniversary of Singapore. Focusing on their country’s highly multilingual and multi-ethnic citizens, the idea of national identity and concept of home are thoroughly explored.

Hand in Glove (アリエル王子と監視人 / Drama, Romance / 80 minutes) is a Thailand-produced film by Yusuke Inaba. This lighthearted film is about an affable Prince from a fictional country. The prince meets a pretty, disarming tour guide when he takes a holiday from his royal duties.

Vietnamese director Bui Trung Hai contributed three of his films to the March screenings. When Autumn Sunlight Comes (Drama / 97 minutes) is about a young man with a seemingly perfect life. He grapples for his identity when his great job and relationship fall apart after a series of unfortunate events. In 2008, this film earned the Gold Remi Award for First Feature Film at the 41st Houston Film Festival.

Hai’s short films are also included in the selection: Summer Rain (Mira Mr’ra Ha / Drama / 19 minutes) and David and Luisa (Drama / 22 minutes). The former is about a Hanoian bride who returns to her hometown upon finding out about her husband’s infidelity. There she rekindles a relationship with an old flame. David and Luisa illustrates a love story between two acting students as they explore the difference between staged and real life. It won the Bronze Remi Award at the Houston Film Festival in 2015.

Le Hoang’s Hot Sand (Cat Nong / 99 minutes) touches on environmental issues as it is set in the beautiful seaside and highlights the conflict between a reptile specialist and commercial resort owners.

The Philippines screens three local films including Ang Kubo Sa Kawayanan (“The House in the Bamboo Grove” / Drama, Fantasy / 83 minutes) by Alvin Yapan. It is an unconventional story about a woman who refuses to leave her house in a bamboo grove. The film is considered a meditation on the permanence of land in the time of cultural loss.

Nestor Abrogena’s Ang Kwento Nating Dalawa (80 minutes) is a contemporary film about a young director and his writer girlfriend. Distance threatens to separate them as the director is accepted into a film school abroad and his girlfriend arranges to migrate to the United States.

Lastly, Da Dog Show (92 minutes) by Ralston Jover follows a dog trainer who fights to keep his family together by putting on street dog shows.

The ASEAN Film Awareness month will include discussions and special Q&A sessions with ASEAN and Filipino filmmakers. On weekends, the Cinematheque will also host its first set of special outdoor screenings. Throughout March, ASEAN films will be promoted, and will launch vital discourse and build a film community amongst South East Asia with the goal of ‘One Vision, One Identity, and One Community’.

All screenings for the Film ASEAN Awareness month of March will be free admission.