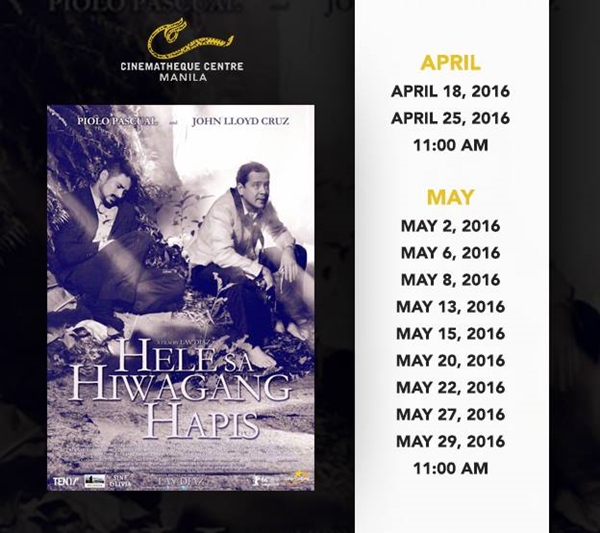 Are you ready for another go at the #HeleChallenge? Due to insistent public demand, the Cinematheque Centre Manila is re-screening Lav Diaz’s Hele sa Hiwagang Hapis during April and May 2016.

The experimental work by the soulful, multi-awarded independent filmmaker on the convergence of history, mythology, literature, and nationalism received rave reviews in its premiere in the Berlin International Film Festival, having won the Silver Bear Alfred Bauer Prize for its cinematic vision and art.

The film unfolds over eight hours, a tribute to our nation’s history and culture, mixing fact with fiction by introducing Philippine national heroes and historical figures with the country’s known literary characters and monsters from folklore in its revolution-era narrative. Using Diaz’s signature long, still camera shots and black-and-white palette, Hele is a contemplative journey through the Katipunan revolt, of Gregoria de Jesus’s search for her captive husband, Bonifacio, and of Isagani and Simoun’s escape into safety following the latter’s failed plan for our country’s freedom. The film is populated by memorable characters, both real and imagined, led by a stellar cast of notable commercial and independent film actors: Piolo Pascual, John Lloyd Cruz, Hazel Orencio, Alessandra de Rossi, Susan Africa, Joel Saracho, Cherie Gil, Angel Aquino, and Bernardo Bernardo, among many others.

Screenings begin at 11 am, with an 8-hour, 5 minute running time, there will be one one-hour break and one thirty-minute break. Admission is at P200. Tickets may be bought at the Cinematheque an hour before the screening, or bought in advance by visiting the Cinematheque on an earlier date.