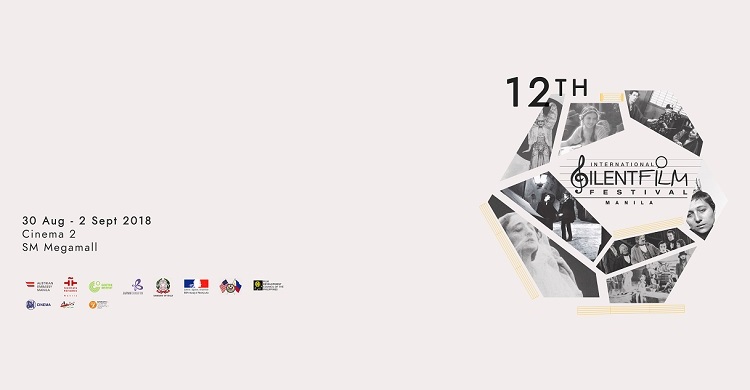 The first and oldest silent film festival in Southeast Asia found a new home on its 12th year.

An ageing Italian aristocrat, Dame Alba d’ Oltrevita (Lyda Borelli), willing to find a second youth, discovers a particular and special solution for her beauty problems: a pact with the devil. However, as for Faust, also for Dame Alba things don’t go as expected…

This film is directed by Nino Oxilia and is the most important of those stylish melodramas made in Italy in the early silent days. It is based on a poem by Fausto Maria Martini and inspired by the aesthetic of Gabriele D’Annunzio.

PHILIPPINES: This Is Not A Lost Film

Featuring “The Lost Film Triology” and an excerpt from “NITRATE: To the Ghosts of the 75 Lost Philippine Silent Films”.

History is a dead cow in a funnel pretending to be a detuned bassoon serenading the moon halved by expectations not so great that new emperors bow their decapitated heads but 3 cakes are always better than 3 cents in this madly turning world peeking pecking ducktards for a midnight snack on the run.

The first film made in the Philippines to feature optically recorded sound was George Musser’s Ang Aswang (The Vampire). In 1932, Musser imported php 50,000 worth of optical sound equipment and turned his house into a studio. He spent a year shooting the film with Charles Miller as his cinematographer and William Smith as his soundman. Despite its Tagalog title, the film was actually recorded in Spanish and English. The film opened to acclaim at the Lyric on January 1, 1933; then at the Tivoli on January 4. Unfortunately, according to some observers, the sound was sometimes out of sync and inaudible.

Abstract found-footage horror using nine existing films from 1952 to 1980 to reimagine, reconstruct, simulate, commemorate, and commiserate with the seventy-five lost Philippine silent films from 1912 to 1933.

The story of the trial of Joan of Arc in 1431 where she was accused of heresy by ecclesiastical judges determined to make her disclaim her visions, which ended with her being burned at stake.

Das Cabinet des Dr. Caligari tells of a mad doctor who is being suspected of sending a reawakened corpse on a killing spree. It is later revealed that he is the director of an asylum for the insane, where our protagonist finds out that the doctor has obsessions far darker and more sinister than he had imagined.

The film, directed by Robert Wiene, is dubbed as “the first true horror film” and considered the quintessential work of German expressionist cinema. It also helped introduce techniques such as the twist ending and unreliable narrator to the language of narrative film.

Musical score by Kontra-GaPi.(Kontemporaryong Gamelan Pilipino), the resident ethnic music and dance ensemble of the UP Diliman College of Arts and Letters.

Bunkichi kidnaps a boy Tetsubo with an appetite for sweets. Unable to keep him under control, the kidnapper returns him to his boss, who refuses to take him back. He tries to dump him on his playmates, but he incites them to demand toys and other goodies from him.

Directed by Yasujiro Ozu, the original theatrical release of Tokkan Kozo was 38 minutes long, but it was presumably lost. A 9.5 mm version which was sold as a format for home viewing was discovered in 1988 but this was incomplete due to degradation of the film reel. The version found in 1988 was 14 minute long, and it was shown at the 2015 edition of the International Silent Film Festival in Manila. Screening this year is a most complete and intact 9.5 mm Pathé baby version that was fortunately discovered just three years ago, which is 19 minutes long.

After her husband John McKay is killed in an ongoing feud with the Canfield family, a woman takes her baby boy Willie to her sister’s house in New York hoping he will never know of the feud with the Canfields. Twenty years later, Willie is a grown man and he receives a letter saying he has inherited his father’s estate and must travel to his family home to take possession. On the train, there he meets a beautiful young woman and falls in love with her. She invites him to dinner but he realizes too late that she is the only daughter of patriarch Joseph Canfield with whom his family has been engaged in a long violent feud. He accepts her invitation and quickly realizes that the Canfield men won’t harm him while he’s in their home. His plan to stay there as a permanent guest is short-lived and the Canfields are soon after him.

A slight plot, about a widower who loves nightlife and a comedian who falls in love with the old man’s daughter, is the excuse to film musical and dance shows featured at a very popular Madrid theater in the 1920s.

“Die kleine Veronika” tells the story of Tyrolean mountain girl, Veronika, who travels to Vienna to visit her aunt, only to find out that the city experience she has been dreaming of is not all the fun and glamourous life she had previously imagined. Rediscovered and restored by the Austrian Film Archive, the film is prized for scenes that show the Tyrolean mountains and the still-famous Vienna Prater amusement park in the 1920s.

The Austrian Embassy in Manila presents “Die kleine Veronika” in partnership with Hearlife Foundation, Inc., a non-stock, non-profit organization created to champion the Filipino deaf and MED-EL Philippines, affiliate of MED-EL WorldWide, Innsbruck Austria and a cochlear implant provider for 20 years in the Philippines. MED-EL continues to innovate, research, develop and manufacture implantable hearing solutions impacting lives of both deaf children and adults. Hearlife Foundation and MED-EL pursue to transform and better the world with the gift of hearing.

For more information and updates, visit the International Silent Film Festival Manila Facebook page and official event page. Don’t forget to use the hashtag #ISFF2018 when you post about the festival on social media. See you at the cinema! 🙂