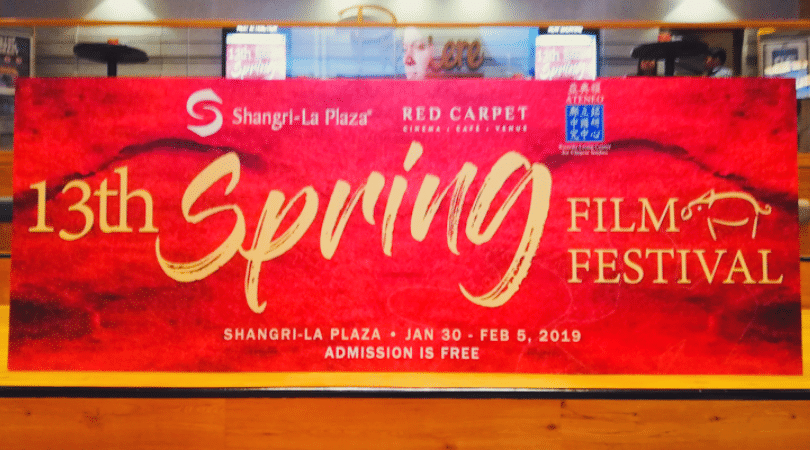 Celebrate ahead of the Chinese New Year with the 13th Spring Film Festival.

Ateneo Ricardo Leong Center for Chinese Studies posted the film line up, screening schedule and side events for the upcoming 13th Spring Film Festival on Facebook.

Six contemporary movies, with themes ranging from comedy, romance and action, will be screened from January 30 to February 5, 2019 at the Red Carpet (formerly Shang Cineplex), Shangri-La Plaza, Mandaluyong City.

A Chinese Painting Exhibit and Chinese Costumes on the Catwalk will be on display during the duration of the film festival.

A Chinese Music Concert and Painting Workshop will be held on February 2, 2PM – 3:30PM and February 3, 2PM – 4PM respectively. Fireworks will also lit up the skies on the eve of the Chinese New Year.

I Belonged To You 从你的全世界路过

A recently dumped radio host finds a new perspective on love when a young intern begins to work with him on his show.

In a small village, where the land was covered with thick snow, a dead body was found in an iced river. Detective Zhou Peng and Wang Hao went to the village searching for perpetrator. What they found is a much more complicated truth.

After being rejected from the police college, a mannerly man travels to Bangkok where he and an energetic distant relative must solve a murder case.


The Third Way of Love

The love story of Lin Qi Zheng, who is from a rich family, and Zhou Yu who is a smart and beautiful lawyer.

A Tale of Three Cities

Hoping to reconnect with his first love, Xu Lai’s hopes are dashes as he finds himself wrapped up in a murder investigation.

Gala Feature: Our Time Will Come

Youths and resistance groups fight for freedom and independence in Hong Kong during the Japanese occupation.