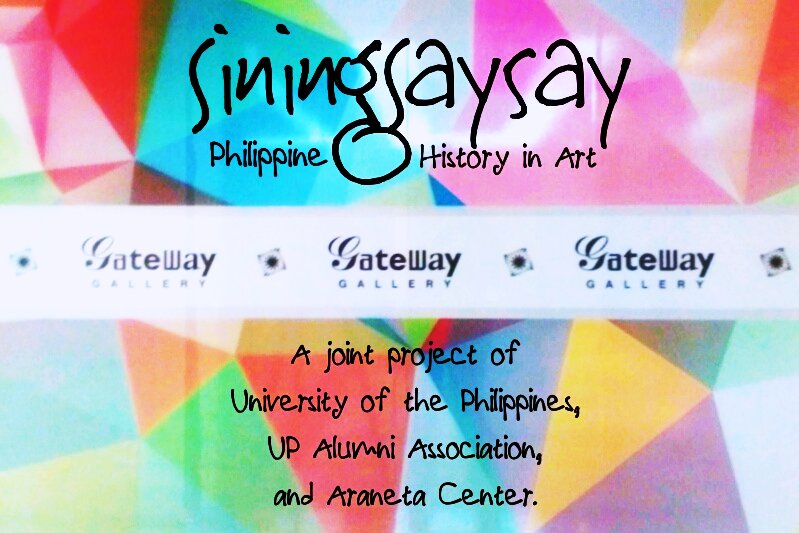 A visit to Gateway Gallery in Quezon City will take you on a colorful journey our Philippine history through visual arts.

Sitting through history class wasn’t something I have enjoyed as a student. There’s just so many dates and names and events to memorize for exams. The visual learner in me gets to appreciate our rich heritage through museum dioramas, theater plays and field trips to historical sites.

Who would have known, away from the buzzing crowd, that the fifth level of Gateway Tower Mall houses the largest private gallery in the country? It was when I was invited for a bloggers’ preview of an art exhibit called “SiningSaysay: Philippine History in Art” that I discovered such place.

“The concept was to be a come-on for students to learn the history of the Philippines in just a half a day by going around. And not just going around a museum, but here it is given to you in the form of art, from alumni artists of UP. Not every country has this, but here, a tourist can come to the Philippines and learn our history by going over these artworks,” said Ponciano E. Rivera, UPAA President.

A joint project of the University of the Philippines (UP), UP Alumni Association (UPAA) and the Araneta Center, it took them no less than five years to complete. With guidance from renowned historians Dr. Serafin Quiazon and Prof. Ma. Louisa Camagay, the artists spent considerable time to their assigned themes. They had to rely on very objective sense of history and one can still see a part of them in each painting.

“SiningSaysay is an innovative way of teaching history, promoting art appreciation, understanding Philippine identity, and imbibing cultural pride; all constituting valuable aspects of teaching and public service, which the University of the Philippines is mandated to do,” said Alfredo E. Pascual, UP President.

After the short program, we were divided into groups. Me, Chelle and Hennessy were able to chat with Mr. Jonahmar A. Salvosa. He chose to create a piece on Galleon Trade because it felt familiar to him. Colorful and very particular with the details, especially the clothes (comes from different eras) and the structure of The University of Sto. Tomas. He is very pleased with the final output because it very much how he envisioned it.

Earlier that day, while taking photos, I also got to meet Mr. Romeo S.A. Carlos who did the piece on Philippine Festivals. He also collaborated with other artists on pieces that features past Philippines presidents such as “Quezon / Osmeña Administration” and “Quirino Presidency“.

“With SiningSaysay, Araneta Center is affirmed as the arts and culture hub of Quezon City. We are housing a collection of great artistic and historic value. This is not just an educational opportunity, but a source of national pride,” said Jorge L. Araneta, Chairman and CEO of the Araneta Group.

Drop by the Gateway Gallery! SiningSaysay is open free to the public everyday, from 11am to 7pm. 🙂