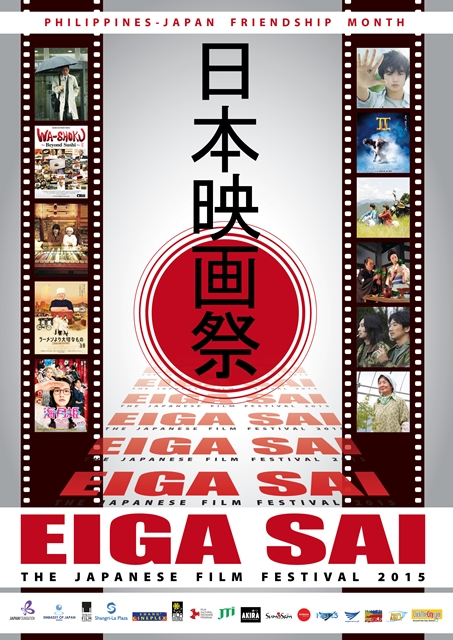 The Japan Foundation, Manila, in cooperation with the Embassy of Japan, Tokyo International Film Festival, Shangri-La Plaza Mall, UP Film Institute and the Film Development Council of the Philippines presents EIGA SAI 2015!

This year’s theme will feature the flavorful culinary world of Japan and the contemporary films released in 2014. Expect a mix of comedy, feature, documentary, historical dramas and all-time favorite sci-fi/fantasy films to complete the line-up. Of course, admission is free! <3

Kicking off Eiga Sai 2015 is Ishii Yuya’s “Our Family” (ぼくたちの家族 / Bokutachi no kazoku / Rated PG / 117 min), a film adaptation of Hayami Kazumasa’s same-named novel depicting traces of emotional journey of a four-member family that is falling apart until the mother is diagnosed with brain tumor.

Ishii-san will be coming all the way from Japan to grace the opening night at the Shang Cineplex on July 9 (Thursday/7:30pm screening time). He will also have a Director’s Talk at the Lopez Center Studio, Ateneo de Manila University on July 10 (Friday/3pm) and at the Shang Cineplex Cinema 2 on July 11 (Saturday/4:30pm).

Wood Job! (（ウッジョブ） ~神去なあなあ日常~ / Wood job Kamusari naa naa nichijo / Rated G / 116 min) is a coming-of-age story based on the best-selling novel by popular author Miura Shoin. City-bred Hirano Yuki decides on a whim to take up forestry work in the mountain village of Kamusari. Yuki nearly buckles under the tough work conditions, but he wakes up to the allure of nature and the locals, and gradually grows up.

Sequel to the spectacle-laden comedy Thermae Romae II (テルマエ・ロマエII / Terumae romae II / Rated PG / 113 min), a live action adaptation of Yamazaki Mari’s popular comic. Roman Empire bathhouse architect Lucius for some reason travel in time to contemporary Japan whenever he’s stuck for new ideas. Working on construction a new bathhouse, he finds himself wrapped up in a conflict that divides the Roman Empire.

The live action adaptation of Iwaaki Hitoshi’s world-renowned Sci-Fi/Fantasy novel, Parasyte (寄生獣 / Kiseiju / Rated PG / 109 min), is directed by Yamazaki Takashi. Watch this thrilling and humor-laced depiction of the battle between humans and “parasytes” that take over and feed off human bodies.

Higashimura Akiko’s comic Princess Jellyfish (海月姫 / Kuragehime / Rated G / 126 min) has been adapted as a TV animation and now a rom-com feature film! Jellyfish geek Tsukimi shares an apartment with other nerdy girls who each have their own obsession. One day, the girls are thrown into a tizzy by the appearance of beautiful cross-dresser Kuranosuke and his brother Shu. Plus, the sacred space of the apartment is menaced by an attack…

Live action adaptation of Miura Shion’s Naoki Prize-winning series, Tada’s Do-It-All House: Disconcerto (まほろ駅前狂騒曲 / Mahoroekimae kyosokyoku / Rated G / 124 min), follows up on the first feature film in 2011 and TV drama in 2013. Three years have passed since old pal Gyoten showed up at the feet of Tada, who runs a handyman shop in the outskirts of Tokyo. One day, Tada finds himself in a jam when Gyoten’s former wife puts her young daughter in his care. Plus, the local gangster organization pushes him to investigate a mysterious cultish group selling vegetables.

Maid Haru is a talented cook but stubborn, which leads her to divorce her husband after a year. However, she is asked by Kaga clan “kitchen samurai” Dennai to marry his son and heir Yasunobu, and works to remedy his lack of culinary skills. A Tale of Samurai Cooking – A True Love Story ( / Bushi no kondate / Rated G / 121 min) features meals made according to the Funaki family’s recipe collection “Ryori Mugonsho” and recreates the workings of samurai family kitchens at the time.

Three elderly women who are friends from childhood in a depopulated and greying mountainous area in Tokushima Prefecture start up a food garnish business. It’s a Beautiful Life ~ IRODORI (人生、いろどり / Jinsei irodori / Rated G / 112 min) interweaves profound human drama, including conflicts with family members, in the stories of hardship as they embark on their new enterprise.

Patisserie Coin de rue (洋菓子店コアンドル / Yougashiten Koandoru / Rated G / 115 min) is an emotional drama involving delicious desserts. A cake maker’s daughter Kagoshima travels to Tokyo to find her boyfriend and take him back with her, but begins to look at herself in a new light when she meets a legendary former patissier. The numerous, colorful western-style confections delightfully sweeten the screen.

Every day, people would queue for over two hours for a bowl of ramen at Taishoken. What’s the celebrated chef’s secret ingredient? There is no secret ingredient. In fact, as most Taishoken fans believe, it’s the charisma of owner YAMAGISHI Kazuo that attracted people from all around Japan to his modest shop. His personality and love for his craft, combined with a precise melange of flavours, combined to create perfection in each ramen bowl. This heart-warming documentary, The God of Ramen (Ramen yori taisetsuna mono / Rated G / 90 min), is not just for noodle fans, but for anyone who loves to be inspired by passionate people.

All films will be shown with English subtitles.

For more information and seat reservation (Director’s Talk), contact The Japan Foundation, Manila at 811-6155 to 58 or at email@jfmo.org.ph.