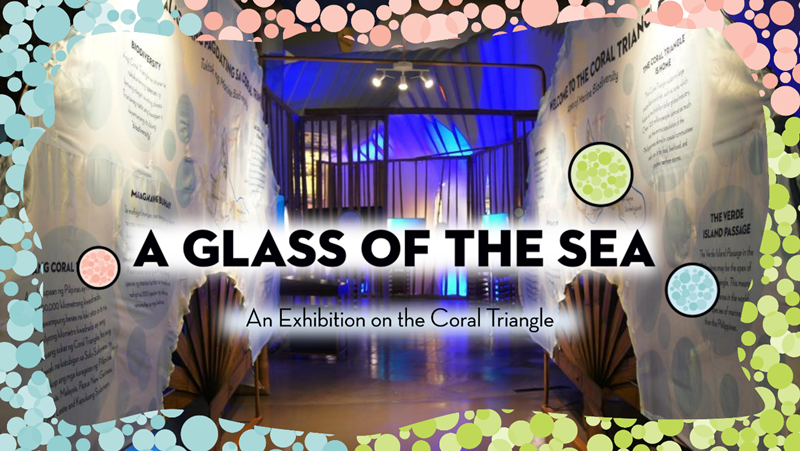 The Philippines is blessed with rich natural resources. So rich that we have the world’s “center of the center of marine biodiversity”, known as the Verde Island Passage.

This is just a small area in the Coral Triangle, the apex of marine diversity encompassing the waters of the Philippines, Indonesia, Malaysia up to Papua New Guinea. Research claims that the area has at least 30-40,000 species where 7 – 12 new species are estimated to be discovered per hour.

Now you can explore the rich marine biodiversity in the Philippines through an immersive, interactive and constantly updated exhibition on the astounding discoveries in the said region. “A Glass of the Sea: An Exhibition on the Coral Triangle” was conceived and created by The Mind Museum, in collaboration with California Academy of Science (CAS) and U.S. Embassy Manila’s United States Agency for International Development (USAID).

So why is this exhibit worth a visit? Because you can..

In The Story of The Sea, immerse yourself with the panoramic video clips showing raw footage of the actual CAS expedition.

2. Get to know the marine creatures

This exhibit showcases the variety of organism (both new and old) found in the Verde Island Passage. Pull out the wooden panels etched with a creature, place them on a counter with an NFC (near filed communication)-reader and watch it ‘come alive’ on screen (with still photo or video).

3. Bond with your friends and family while learning

A trip to The Mind Museum won’t be complete for kids and kids-at-heart without going through all the interactive workshops, games and science shows. Let your creativity and imagination come to play at Ocean in Motion.

4. Play and pledge in protecting our ocean

Three (3) original video games demonstrate different problems that our ocean faces. Push away the creatures from getting snagged as bycatch in Net Escape, catch the garbage in time for the trash not to harm the creatures in Garbage Catch, or test your food choices in Sustainable Food Market. Make a pledge at the end of each game in The Story of the Science of the Sea.

5. Reflect your relationship with the Coral Triangle

Check out the sculptures on display made from trash, creatively put together in ways that cast impactful shadows. What is The Story of Your Role in the Sea?

Funded by the USAID under the Partnerships for Enhanced Engagement in Research (PEER Science Grant), this enabled local researcher and The Mind Museum curator Maria Isabel Garcia to partner with U.S.-based researcher Dr. Terrence Gosliner of CAS to work together on achieving ecosystem resilience.

The exhibition is set to travel around the around the Philippines and be experienced by participants of all ages. Catch “A Glass of The Sea” exhibit at The Mind Museum while you can!