Your Guide to the 9th International Silent Film Festival 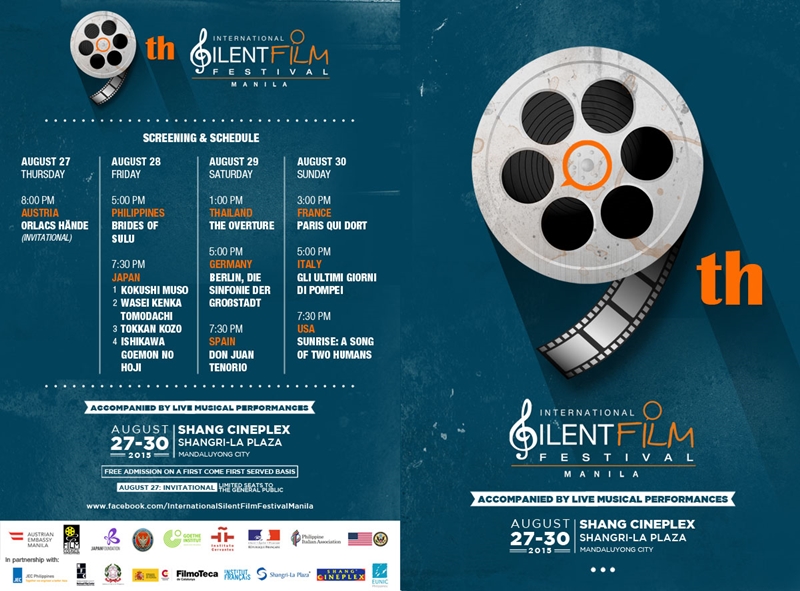 “If there were no words, no way to speak, I would still hear you..” – Valentine


Can you imagine life without spoken words? Without music? I know there are a plethora of ways to communicate with other people (written words, body language, etc.) but it would make little sense or nothing at all unless there is sound that makes everything alive and more meaningful.

A common misconception about silent films, which were a thing back in the day, was that silence meant the absence of sound. Yes, there’s no dialogue all throughout but silent films are always accompanied with live music that contributes to the atmosphere and move the viewers into tears or laughter or feeling sadness.

Curious? It is with excitement that I am sharing with you a one of its kind film festival in asia, the International Silent Film Festival happening on August 27-30 at the Shang Cineplex, Shangri-La Plaza, Mandaluyong City.

One of the newest members, Austria is opening the 9th run of the festival with a classic silent horror film Orlacs Hände (The Hands of Orlac, 1924, 105 minutes). Based on the fantasy novel of French writer Maurice Renard and directed by Robert Wiene, the film tells the story of world-famous pianist Paul Orlac who lost his hands on a train accident. Later he discovers his medically transplanted hands have a will of their own..

Invitational cocktails start on 6pm and screening commences at 8pm (limited seats to the general public). Look forward to the live musical score from the Philippines’ oldest amateur jazz band, The Executives, founded by the late Senator Raul Manglapus in 1957.

Two island lovers, of opposing religions and economic class, fall in love and flee together. Beautifully filmed on location, using local Moro tribesmen, John Nelson’s Brides of Sulu (1934, 47 minutes) from the Philippines provides a rare glimpse into a lost culture – a film that shows the lingering power of cinema. Catch the film with live performance from Kjwan at 5PM.

Thailand is another newcomer participating country in this film festival and they are making their debut with The Overture (2004, 104 minutes), an art, culture and heritage film based on the life of palace musician and Ranad-Ek (Thai traditional wooden xylophone) master Laung Pradith Phairao. The Royal Thai Navy Traditional Ensemble, who only plays during Royal Ceremonies, State Ceremonies, religious ceremonies and live on Radio Thailand, will perform the live musical score at 1PM.

Don Juan the seducer is probably the most famous character in Spanish folklore. In this particular film version of the classic play penned by Jose Zorilla showing at 7:30PM, Don Juan Tenorio (1922, 133 minutes) does just that – targeting a young novice about to take holy vows. Follow his antics with live music from The Dingdong Fiel Trio.

A crazy scientist immobilizes Paris with a mysterious beam. Paris is hypnotized. Paris sleeps. Get a rare glimpse of The City of Lights with empty streets! The 1924 French science fiction comedy film, Paris Qui Dort (The Crazy Ray, 35 minutes), is scheduled at 3PM with Ian Lofamia band playing blues music.

In Italy’s Gli ultimi giorni di Pompei (The Last Days of Pompeii, 1924, 88 minutes), well respected Pompeiian Glaucus performs an act of kindness by buying Nidia, a blind slave being mistreated by her owner. Nidia falls in love with her new master but he only has eyes for Jone, who in turn is lusted after by Arbace. The Philippines’ longest-running and quintessential Filipino rock band, The Dawn, will perform the live accompaniment at 5PM.

The festival ends with Sunrise: A Song of Two Humans (1927, 95 minutes) from the USA, slated at 7:30PM. This fable-life, poignant story, directed by German film director F.W. Murnau talks about a rustic farmer who falls under the spell of a city girl who convinces him to drown his wife so they can escape together. Along the course of the film, the two rediscovers their love for each other. Razorback‘s music will put you on the edge of your seats.

Enjoy FREE admission on the 9th International Silent Film Festival, a first come first served basis at the Shang Cineplex. Expect the lines to be long, with some patrons queuing at least 2 hours before the scheduled screening.

The 9th International Silent Film Festival is presented by Goethe-Institut, Instituto Cervantes, The Japan Foundation, Manila, the Philippine-Italian Association, the Film Development Council of the Philippines, and the Embassies of Austria, France, Thailand and the United States of America.

This is made possible with Shangri-La Plaza, Shang Cineplex, JEC Philippines (Austria), the National Film Center of The Museum of Modern Art Tokyo and Shochiku Co., Ltd., the Embassies of Italy and Spain, Filmoteca de Catalunya, Institut Francais, and EUNIC Philippines.