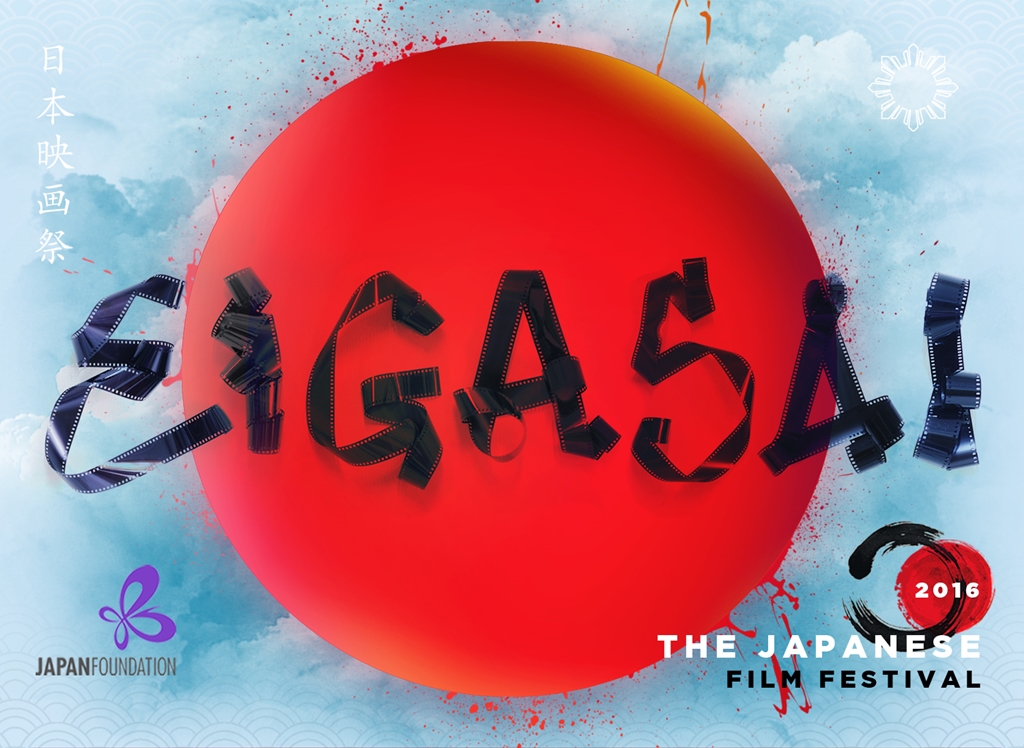 Fans of Eiga Sai are in for a treat as this year marks 60 years of Philippines-Japan friendship and the Japan Foundation, Manila’s 20th anniversary!

Twelve films were carefully curated for this year’s line up. Expect award-winning film adaptations of some of the best fiction and non-fiction novels written by the most prolific Japanese writers, produced between 2011 to 2015.

The festival will open on July 7 with “KAKEKOMI” (駆込み女と駆出し男 / 2015 / Drama, Comedy / Rated R13 / 143 min), directed by this year’s guest of honor, Masato Harada. This is his first jidaigeki (samurai period film), based on the novel “Tokeiji Hanadayori” by Inoue Yasushi. Set at an actual “divorce temple” in Kamakura, it follows the efforts of a novice doctor and playwright who falls into a whirlwind of events as he tries to help two women get out of their respective marriages.

Complete line up for Eiga Sai 2016

Director Harada’s film adaptation of Inoue Yasushi’s autobiographical novel “Chronicle of My Mother” (わが母の記 / 2011 / Drama, Family / Rated PG / 118 min) traces the roots of the author’s feeling of abandonment after being separated from his parents at a young age, and how this has resonated for most of his adult life.

Provocative and dramatic, Academy Award nominee for Best Foreign Language film “The Great Passage” (ビリギャル / 2013 / Comedy, Drama, Romance / Rated PG / 133 min), based on the novel by Miura Shion, follows editor Majime’s passio for pursuing the prodigious goal of creating a huge dictionary with over 240,000 entries over a fifteen-year period.

“Pale Moon” (紙の月 / 2014 / Mystery / Rated R13 / 126 min), adapted from popular author Kakuta Mitsuyo’s eponymous novel “The Kirishima Thing” by director Yoshida Daihachi, depicts the downfall of a housewife who falls head over heels in love and into a life of crime.

When assistant camera Tatsura Sawada joins the Japan Overseas Cooperation Volunteers, he lands in trouble with fellow member Kazunari Hamura. “Crossroads“(クロスロード / 2015 / Rated PG / 103 min), directed by Suzuki Junichi, finds them both dispatched to the Philippines where Tatsura meets siblings Noel and Angela in Baguio. Eight years after, Tatsura meets Kazunari once more, at the Tohoku region where the great earthquake and tsunami occurred.

The feature-length animated film, “The Boy and The Beast” (バケモノの子 / 2015 / Adventure, Drama, Family, Animation / Rated PG / 119 min), based on an original screenplay by Studio Chizu and Hosoda Mamoru, presents the story of Kyuta, who enters into a strange agreement with a beast named Kumatetsu. Along the way, the two gradually create a strong bond equal to that of a true father-son relationship.

In “Our Little Sister” (海街ｄｉａｒｙ / 2015 / Drama, Family / Rated R13 / 126 min), the death of Sachi, Toshino and Chika’s absentee father signals the beginning of a new life filled with joyful discoveries as they travel to the countryside for his funeral, and meet their estranged teenage half-sister, Suzu.

Officers of The Japan Foundation Manila and the Cultural Center of the Philippines (CCP) has signed an agreement that makes Eiga Sai and Cinemalaya Independent Film Festival and Competition as allied festivals.

Completing the trio of Director Harada’s film featured for the festival, there will be a one-time special screening of “The Emperor in August” (日本のいちばん長い日 / 2015 / Drama, War / Rated PG / 136 min) on July 8 to celebrate the launch of this partnership. It will be followed by the Director’s Talk, where he shares his experience and knowledge about the art of and his career in film making.

An adaptation of Hando Kazutoshi’s non-fiction novel “Nihon no Ichiban Nagai Hi: Ketteiban”, it reveals the anguish and deliberations of the Japanese who put their lives to end the Pacific War and achieve peace.

For the 12th Cinemalaya Festival on August 5-14, 2016, aside from Shoji’s “Ken and Kazu”, JFM will bring another independent film to be featured in the Cinemalaya’s Asian section: “August in Tokyo” (愛の小さな歴史 / 2014 / Drama, Romance / Rated R13 / 80 min) by Ryutaro Nakagawa. This film portrays the dynamics of people trying to co-exist in nature and in the city; directed by one of the leading up-and-coming filmmakers in Japan and an established poet.

All films will be shown with English subtitles. All screenings are free and seats are available on a first-come, first-served basis, but admission process may differ according to venues.

I’m looking forward to attend all Director’s Talks and watch ‘Our Little Sister’, ‘Crossroads’, ”The Great Passage’ and ‘Flying Colors’. How about you, dear reader? Let’s talk about it at the comments section below!