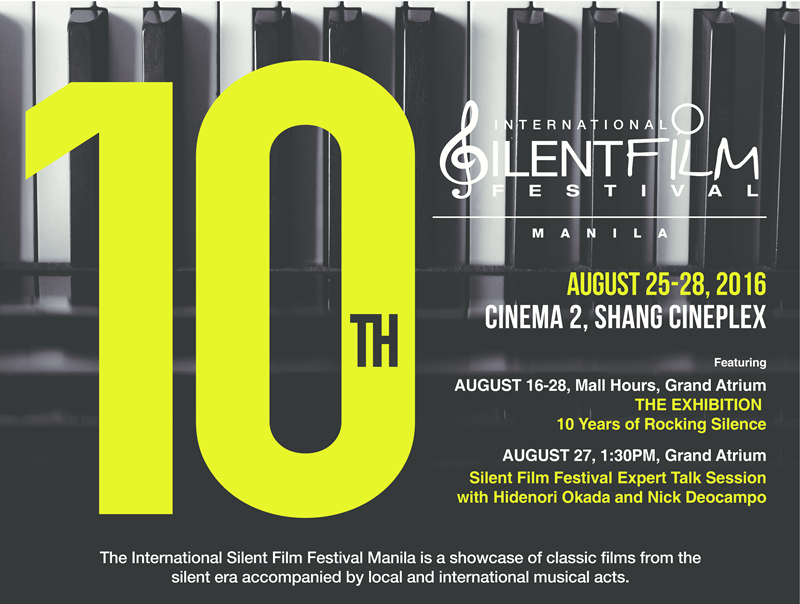 Because action (and music) speaks louder than words.

Did you know that the Philippines has been hosting a one-of-its-kind film festival in all of Asia? Yup, I’m talking about the International Silent Film Festival! It started as a collaboration between Goethe-Institut, Instituto Cervantes and the Japan Foundation, Manila. And now it’s been 10 glorious years of bringing the best classic films to this generation.

Once again, join us at the Shang Cineplex from August 25 to 28 for an in-depth appreciation of cinema.

The festival opens on August 25 is the film Play On! Silent Shakespeare (British Council, United Kingdom) at 7:30PM. This 2016 compilation of silent Shakespeare shorts includes the world’s earliest surviving Shakespeare adaptation, King John, and an early version of Hamlet. This will be accompanied with a live musical score by Tago Jazz Collective.

Our country’s very own Maicling Maicling Pelicula nang Ysang Indio Nacional, set in the Spanish-ruled 1890s Philippines, will be shown along with the sounds of indie rock band, Oh! Flamingo, on August 26, 5:30PM.

Maciste All’Inferno, the 24th installment in the highly successful “Maciste” series, is a story that takes place in hell. The film will be introduced with a lecture by film expert Nick Deocampo, and will be accompanied by music from iconic Filipino musician, Ely Buendia, on August 26, 8:00PM.

The first film version of a popular Spanish zarzuela, La Revoltosa, is an unlikely story of two lovers set to its original musical score to be performed by the DingDong Fiel Music Ensemble and tenor Miguel Ángel Lobato on August 27, 3:00PM.

Muteki (The Foghorn), a tragic story of forbidden love based on a novel by Jiro Osarago, will be screened on August 27, 5:30PM. There will be a talk on the film’s history setting, background and its director by Hidenori Okada. Makiling Ensemble will give musical scoring to the film.

Watch the love triangle story between an arch-duke, a count and a young ballerina in the film Der Balletterzherzog this August 28, 5:30PM. It will be accompanied by multiple award-winning vocalist of the Philippine rock band Wolfgang, Basti Artadi.

Closing this year’s festival is Der Letzte Mann (The Last Laugh). It considered by many as the legendary F.W. Murnau’s most important work and one of the most revolutionary works in film history. See the film come to life with internationally-recognized local band Up Dharma Down on August 28, 8:00PM.

All screenings will be open to the public on a first come, first served basis.

Join Hidenori Okada and Nick Deocampo on August 27, 1:30PM at the Grand Atrium. There will be a discussion of the characteristics of cinemas and music during the silent film era in Japan. Learn the importance of benshi (silent film narrator) in the Japanese Silent Film history.

An immersive experience on the art and history of the movie industry’s golden era awaits you at the Grand Atrium. There’s a live movie set and interactive photo wall where you can create your own personal movie poster – both Instagram-friendly! Expect live drawings by visual artists. Interactive story tellers Manila Who (known for their story driven walks of Escolta) will spearhead a trivia game experience.

#SilentFilmFestManila is celebrating its 10th year. Watch classic films from the silent era accompanied by international music acts from Aug 25-28. Details soon on the blog demsangeles.com ?