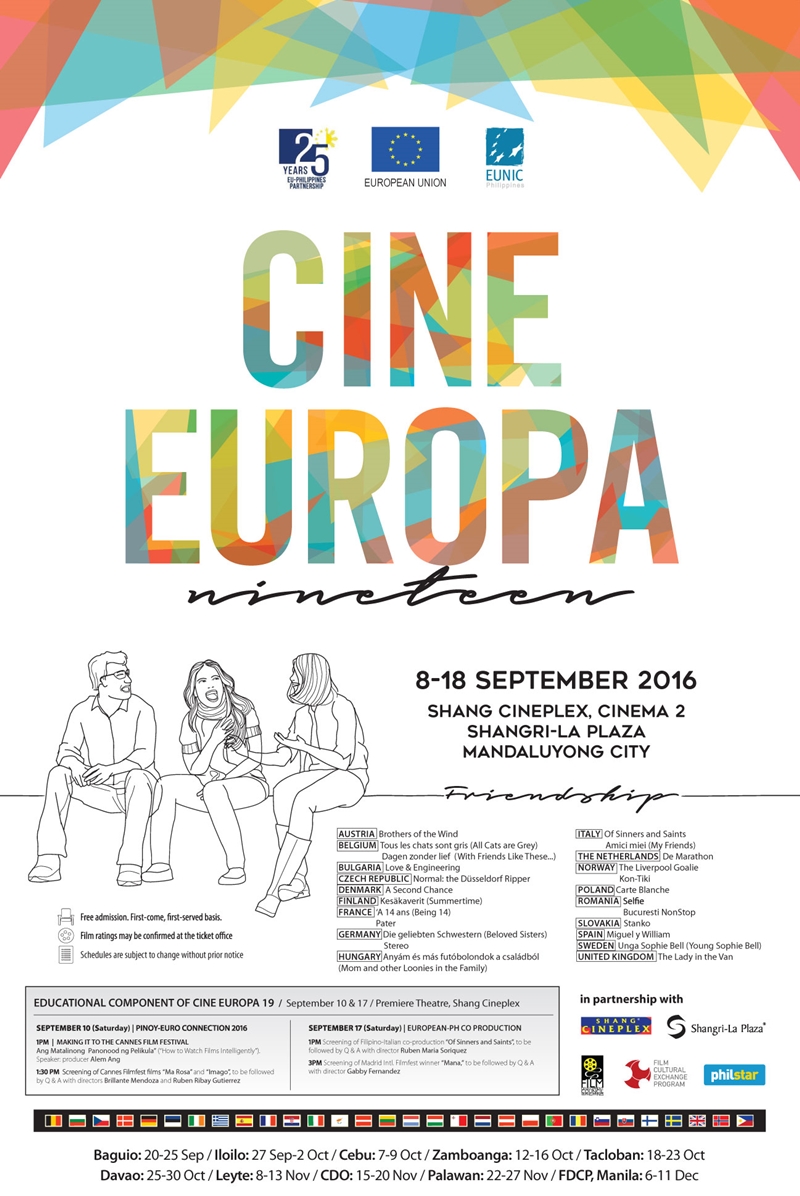 Expect twenty-four European films in 11 locations in the next four months from the 19th edition of Cine Europa.

There is no better time to have “friendship” as the theme for this year’s Cine Europa. This perfectly underscores the dynamic cultural cooperation and long-lasting camaraderie between the Philippines and the European Union (EU). This also coincides with the EU Delegation marking its 25 years in the country.

The festival also pays tribute to Filipino filmmakers we works have been acknowledged in Europe through special screenings and forums.

Austrian film Brothers of the Wind (2016 / Adventure, Drama, Family / 98 min) is a powerful tale of hope and discovery about a boy named Lukas who developed a strong bond with an eagle that fell from its nest, which he cared for and named Abel.

All Cats Are Grey (Tous les chats sont gris / Drama / 90 min) is a Belgian film about a rebellious upper class teenager named Dorothy and a kind-hearted amateur detective named Paul who also happens to be her biological father. She asks for his help to find her dad, not knowing Paul is the man she’s looking for.

Meanwhile, another film from Belgium, With Friends Like These (Dagen zonder lief / Comedy, Drama / 100 min), shows how the return home of the character named Black Kelly disrupts the life of her old friends and causes them some trouble.

Bulgarian film Love & Engineering (Comedy, Romance / 81 min) is about Atanas, a computer engineer who develops a formula to find the perfect wife. He uses other engineers as guinea pigs and sends them out to test his theories in the real world.

Czech Republic’s Normal: The Düsseldorf Ripper (Crime, Drama, Thriller / 100 min) is about Peter Kuerten, a brutal serial killer who turns himself over to the police, and a young lawyer Justus Wehner who takes on his case but finds himself losing control as he studies the killer’s mind.

A Second Chance (Drama / 105 min) from Denmark, which was screened during the press preview, is about two best friends who are both detectives trying to solve a case brought about by a junkie couple.

Summertime (Kesäkaverit / Comedy, Drama / 90 min) from Finland is a warm-hearted and funny movie about how friendship stands strong despite the individual hardships of 25-year old Karoliina, Iiris, and Eeva.

French films also make an appearance through Being 14 (‘A 14 ans / Drama / 105 min) which is about three high school seniors, Sarah, Jade and Louise, who try to deal with the torments of adolescence.

While in Pater (France / Drama / 86 min), we see Vincent Lindon and Alain Cavalier film each other and portray characters they invented together.

From Italy, opening the festival is the film Of Sinners and Saints (Drama / 103 min). It is about a young Italian priest named Leonardo who was assigned to counsel battered women and teach English to children in Payatas, Metro Manila. There he meets his former lover, Merlinda, and tries to save her from an abusive husband.

Ruben Soriquez, popularly known as Liza Soberano’s father in the teleserye “Dolce Amore”, has produced, directed and acted in this Filipino-Italian co-production for which he won Best Actor in the 2015 World Premieres Film Festival.

De Marathon (Comedy, Drama / 120 min) from the Netherlands tells the story of best friends Gerard, Leo, Kees and Nico trying to find a sponsor who will pay them to run the Rotterdam marathon in the hopes of saving their garage business from bankruptcy.

Norwegian film The Liverpool Goalie (Comedy, Drama / 81 min) is about 12-year old Jo who is desperately searching for a rare football card which he believes will solve all his problems.

Kon-Tiki (Adventure, History / 120 min) is about the legendary expedition across the Pacific Ocean of Norwegian adventurer Thor Heyerdahl.

Inspired by a true story, Carte Blanche (Drama / 104 min) from Poland is about a beloved history teacher who tries to hide the fact that he is about to become permanently blind due to a genetic disease so he can keep his dream job and continue helping his students.

Mom and Other Loonies in the Family (Anyám és más futóbolondok a családból / Comedy / 140 min) is a screenplay from Hungary that tells the story of an odd family during the 20th century filled with heartwarming and mischievous events.

From Romania, Selfie (Comedy / 123 min) is about three fresh graduates from high school, Yasmine, Roxi and Ana, who go on a trip to live out a rebellious teenage lifestyle, breaking the rules without thinking of the consequences.

Bucuresti Nonstop (Drama / 86 min) tells the story of four ordinary people caught in extraordinary situations, but one thing they have in common is Achim’s 24/7 NonStop store.

Slovakian film, Stanko (Drama / 75 min), is a tragicomic movie that deals with the themes of women trafficking, and the universal bonds of people marginalized by society.

The film from Sweden, Unga Sophie Bell (Young Sophie Bell / Drama / 80 min) tells the story of how two best friends dream of living in Berlin but their plans change after Alice disappears, and Sophie sets out on a journey full of exciting discoveries.

The Lady in the Van (Drama / 104 min) from United Kingdom is about the relationship between renowned writer Alan Bennett and Miss Shepherd who “temporarily” parked her van in Bennett’s London driveway but ended up living there for 15 years.

Sponsored screenings and forums at the Premiere Theater, Shang Cineplex

Producer Alem Ang will discuss about “Making It to the Cannes Film Festival – Ang Matalinong Panonood ng Pelikula (How to Watch Films Intelligently)” at 1PM followed by the screening of Cannes Filmfest entries “Ma Rosa” and “Imago” with Q & A with its respective directors Brillante Ma Mendoza and Ruben Ribay Gutierrez.

Admission is FREE for all screenings in all locations.

Cine Europa is presented by the European Union Delegation to the Philippines, the EU member states; embassies, Embassy of Norway, EU MS Consulates and its partner organizations from the private sector, academe and government agencies.

Dear reader, did you miss out any of the screenings during the Manila leg of Cine Europa 19? Which ones will you watch this week? Let me know in the comments section 🙂