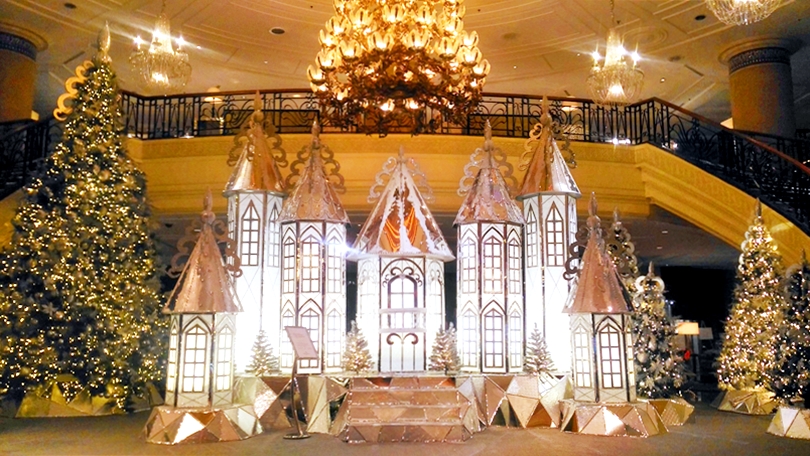 Honestly, I do not remember being THAT busy during December. Instead of the usual press conferences and such, I went to various media appreciation parties from brands and PR agencies that I love.

Krispy Kreme / Buensalido PR. Technically it was KK’s flagship store relaunch but it was a party nonetheless! Caught up with my writer friend Euden while we indulged in Original Glazed donuts and iced coffee. Up Dharma Down played that night but I couldn’t stick around long enough to catch their set.

EON family. #XmasTraditEON was held at Todd English Food Hall, SM Aura Premier on a Monday night. Aside from the fun group games (we won!), photobooth and delicious food, we hanged out with our favorite EONites, met other account managers and was introduced to the new management. I also won Shell GCs during the raffle!

Department of Tourism (DOT) family. I was reunited with the #MIMAROPABeshies – a group of media friends from my November trip for Out of Town Blog. I also went with Ms. Joy of Gastronomy by Joy, who I represented during the Bicol Familiarization Tour last June! We headed off to Barbara’s after covering the launch of Pasko sa Intramuros. I won 3K Duty Free GC!

READ: A Weekend Worth Spending at Legazpi, Albay | Your Next Ultimate Getaway at Misibis Bay Resorts, Albay | MIMAROPA Festival 2016 in Puerto Princesa, Palawan

YouTube / TeamAsia family. From YouTube FanFest to YouTube Lounge, I was part of every YT event this year (except the Creators Day which coincided with a previous commitment /sob). On a Saturday night we (me, Duane, Sir Alwin and Christian Melanie) headed over at The Hungry Hound in BGC where the intimate year-end party with local YT stars was happening. We looked back to the year it has been, discussed some exciting developments for 2017 and awarded the Silver Play Button to creators who surpassed the 100K subscriber mark.

Christmas Party No. 3: #YTYE! Congrats to everyone who got their Silver Play Button award & thank you YT fam for the chill & fun celeb ?

Embassy of China. Sometime in August I had the opportunity to collaborate with the embassy through a business forum, tackling the state of China’s economy and how it is affect the global economy. The coordinator invited me and my fellow bloggers to their Christmas party.


READ: What I Learned About China’s Economy in the Global Context #SilkRoadPH

Christmas Party No.4 with Embassy of China #MerryChPhXmas

FDCP family. The Film Development Council of the Philippines hosted a thanksgiving event called “Handog sa Press” at the FDCP Cinematheque Centre Manila. Various movie and television press as well as people from MTRCB were given tribute. FDCP Chairwoman Liza Dino also shared their accomplishments and plans for next year.

Finally, a photo with FDCP Chairwoman .@lizadino ? Earlier she has shared their accomplishments & plans in educating people (esp in the regions) & empowering filmmakers. Exciting times ahead for the local film industry!

Uber Philippines / TeamAsia family. We celebrated the year with Uber at Rambla. The management shared stats on various campaigns such as UberPool and UberLechon (a stint they did for their 1st anniversary in Cebu). We also watched their three-part Yuletide mini-series that revolves around the theme “find home, wherever your destination is.”

Some sent #bloggermail in lieu of parties.

I love nurturing relationships so I highly appreciate gestures like these. I get to know the people on a personal level AND I feel that my efforts contributed to the success in pushing their respective brands/campaigns forward. From the bottom of my heart, thank you to all the PR agencies that I have worked with in 2016, as well as blogger friends with whom I had collaborations with. I am looking forward to working with you all again for 2017 and beyond 🙂