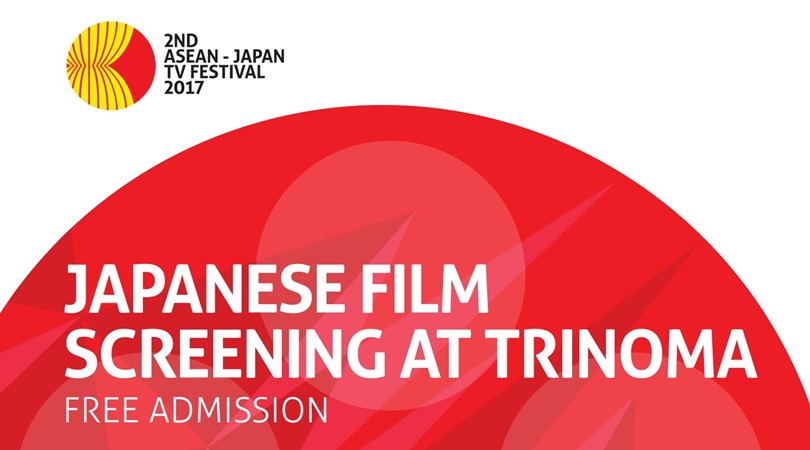 You can still enjoy Japanese films plus a mini-concert during the 2nd ASEAN – Japan TV Festival this September in Quezon City!

If you’re still looking for more, here’s some good news from our friends at the Japan Foundation, Manila!

Audiences can enjoy five films, two of which are part of this year’s EIGASAI, at Trinoma Mall on September 7-10, 2017 for FREE!

Hinako moved to a 3-room apartment in the housing project called danchi with her husband Seiji, six months ago. They had managed a third generation herbal medicine store until the unexpected death of their beloved son in an accident. Since the move, Hinako has started a part time job, but Seiji spends everyday wandering aimlessly around. Occasionally a young man visits the Yamashita household because the remedy that Seiji makes is the only effective medicine for him. This mysterious young man, who speaks slightly strange Japanese, is MR. SHINJO. After a while, Seiji disappears from the estate. What really happened to Seiji? And who is SHINJO? Soon rumors start up among this small neighborhood.

Eikichi, the vocalist of a little-known death metal bad, has decided to marry his pregnant girlfriend, Yuka. He returns to his family home in Tobi Island after several years. However, his headstrong father, Osamu, collapses and is diagnosed with cancer.

Produced by the Japan Foundation and the Tokyo International Film Festival, Asian Three-Fold Mirror 2016: Reflections is an omnibus film which brings together three acclaimed directors who each created a segment following the theme “Living Together in Asia.”

The Philippines’ Brillante Mendoza directs SHINIUMA Dead Horse, a film about an illegal Filipino immigrant in Japan who is deported back to the Philippines. Upon his return home, he discovers that his family has dispersed long ago and there’s no place for him to stay. Pigeon by Isao Yukisada focuses on an elderly Japanese man who is emotionally distant from his son and chooses to live in solitude on an estate in Malaysia, where he soon forms a bond with his new caretaker. Beyond the Bridge, set against the backdrop of the Cambodian civil war and the history of the Cambodia-Japan Friendship bridge, tells the love story between a Japanese architect and a Cambodian woman whom he ends up leaving behind.

Unemployed 35 year old Sakurai (Masato Sakai) aspired to become an actor, but has failed miserably. He decides to end it all by killing himself, but first he goes to purify himself at a public bathhouse. While at the bathhouse he meets the very prosperous Kondo (Teruyuki Kagawa) who suffers a fall which brings on amnesia. On a whim, Sakurai switches locker keys, steals the man’s belongings and decides to pass himself off as the wealthy Kondo. Sakurai is not to know that Kondo runs an illegal business which brings him into contact with some mighty annoyed yakuza gangsters.

Meanwhile, Kondo has been convinced that he is actually that failed actor Sakurai. Fortunately, at the hospital, he meets the lovely Kanae (Ryoko Hirosue) who, while yearning for marriage, goes out of her way to help “Sakurai” put himself together. Finally the real Kondo comes to his senses, but before he can make a new life with Kanae, he has to solve the many problems caused by the man who assumed his identity.

A musical coming-of-age drama set in Osaka and directed by Yamashita Nobuhiro. Shibutani Subaru of the idol group Kanjani Eight stars as an amnesiac who clashes fiercely with a young woman played by Nikaido Fumi (Himizu) and sings passionately. A man who has lost his memory (Shibutani) interrupts a concert by a band managed by Kasumi (Nikaido). His powerful singing voices catches her attention and she decides to take him on, calling him her lapdog. However, the man is unaware of his own shocking past.

All screenings are FREE and seats are available on first-come, first-served basis. Tickets will be distributed one hour before the screening time.

The festival will also culminate in a FREE Public Event at the Trinoma Mall Activity Center on September 9, 2:45 to 5:30 PM, with a performance by Airdance Philippines (with Rhosam V. Prudenciado Jr. of Dance Dance Asia 2017, also an event by the Japan Foundation Asia Center). This will be followed by a mini-concert with Rivermaya, Julie Anne San Jose and Erik Santos, together with Japan’s Soil & Pimp Sessions and Pink Cres.

This event coincides with the 2nd ASEAN – Japan TV Festival 2017 (AJTVF2) to commemorate the 50th anniversary of ASEAN.

Details are subject to change without prior notice. Visit http://facebook.com/jfmanila for more information.