Video Games are the Future of Education 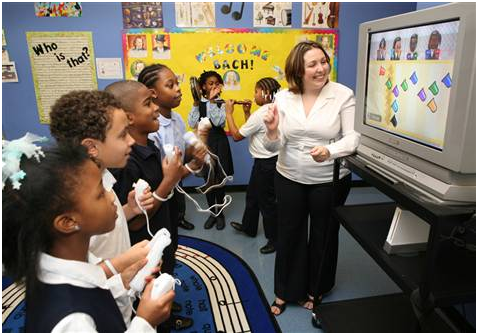 Initially developed solely for entertainment purposes, video games have become so popular and so addictive, that the general perception became so negative in some cases that people simply refuse to accept the fact that video games can also have positive sides as well.

A lot of parents and teachers don’t even want to hear about children playing video games, as they see gaming as completely unproductive. However, if you take a close look at things, and keep an open mind, you will see that video games are actually quite at the opposite pole – they can be very productive, and help teenagers develop several useful skills. Several teachers are already using video games in their teaching process, and by the looks of it, video games might prove to be the future of education.

Most of the people that say video games have no positive impact whatsoever are likely the people that haven’t even looked at a modern video game. Their theories are based solely on the first games that flooded the market, which were created with maximum entertainment in mind. These games took maximum advantage of the possibility of creating a virtual world, and gave the player the ability to do the things they couldn’t do in real life, mainly allowing them to cause havoc and have a highly-destructive behavior. While this side of gaming is in fact a bit non-productive, in terms that it doesn’t actually teach the player anything, it can still be benefic due to the fact that it allows the player to relax.

The second most-common myth about video games is that they are all addictive, and will eventually transform anyone into a game-obsessed zombie. The addiction part may turn out to be true for some of the modern games as well, but it can turn out to be a good addiction; what people worry about is the addiction that was generated by the first games, and the reason that caused it was that video games opened up a new world, a virtual world that was not available anywhere else. Nowadays virtual reality is not something uncommon, so that type of negative addiction is no longer present.

The main difference between today’s games and the games of the past is the overall mechanism of most of the games; while back then it was all about proving you’re the absolute best, all on your own, modern games put a lot of focus on cooperation and team play. This exact aspect is what makes the game educational, both because they allow students to learn to work together, and because even if they generate an addiction, it is a benefic addiction, as there is always something positive to be learned, because you’re not spending time with a computer, but with other people.

Video games also develop the player’s ability to multitask, while enhancing the reflexes as well, meaning that students will lean to be more productive in the educational environment, and be even more productive in the real-world environment. The ability to multitask is a must-have skill in most of the leading positions, no matter the field, so mastering it is a definite plus.

Maybe the most important aspect of video games is that they can combine learning with entertainment in such a seamless way that the student may not even is aware of the fact that he is actually learning. The complicated storyline in modern games, along with the complex gameplay and the large variety of requirements the player must meet, video games can help enhance the following skills:

Christopher Austin is the writer to this article. His daughter loves playing makeup video games and she prefers playing them online at Makeover Games 365. At this site she finds all her favorite makeup games to play.