Twenty-three movies from eighteen European countries will be shown to display experiences and traditions in Europe from September 10 to November 29, 2015!

Cine Europa turns 18 this year! It will continue to highlighting the best of European cinema by featuring a compelling mix of coming-of-age-flicks and timeless love tales that will bring audiences to an exploration of the human spirit and emotions that is truly unforgettable. 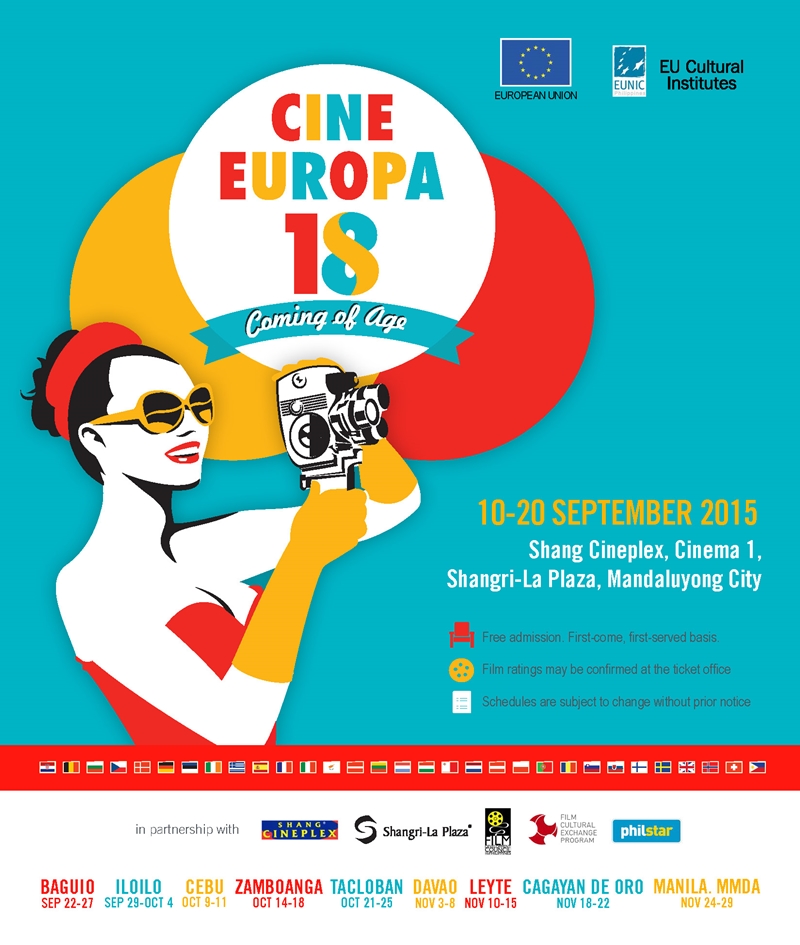 A lonely teen’s friendship with a free-spirited British neighbor pushes her to break free of the bonds of childhood in Puppylove (Belgium / 2013 / Fiction / 85 minutes / Manila & Iloilo screening only), this year’s opening film.

In front of the extraordinary landscape of the Austrian mountain backdrop, with stunning dance-moves and spectacular fusion of many different dance styles, such as hip-hop and disco fox “Rise Up! And Dance”  (Austria / 2014 / Comedy, Music, Romance / 90 minutes) shows a story about life, first love and last but not least about the magic, power and passion of dancing.

Gilles (Belgium / “Buitenspel” / 2005 / Drama / 100 minutes) is the story of a young soccer player whose dream is to run onto the pitch of King Baudouin Stadium wearing the uniform of hiss favorite football team, the Belgian National Squad a.k.a. ‘Red Devils’.

Follow the love story about a restless Bulgarian woman trapped between an intolerably stable life with her rich American fiancee and the passionate, but destructive love she left behind in Faith, Love and Whiskey (Bulgaria / 2012 / Drama, Romance / Rated R-16 / 75 minutes).

Přijde letos Ježíšek? (Czech Republic / “Little Baby Jesus” / 2013 / Romance / 100 minutes) revolves around the life of a charming 60-something Jose, who returns to Prague after living in Mexico for 30 years, to ask for a miracle so his daughter Penelope can bear a child.

One of the special highlights in this year’s festival is the arrival of Director Lenka Kny, who is expected to hold a series of lectures in October.

Finland returns to the festival with its movie, Naked Harbour (Finland / “Vuosaari” / 2012 / Drama / Rated R-13 / 123 minutes). During one winter week all the characters in the film are faced with something irreversible. These eight different people are imperfect, weak and lost, but they are driven by the same need to be loved, seen and touched.

In the movie La Belle Vie (France / “The Good Life” / 2014 / Drama, Romance / 96 minutes), Mikey searches for the good life and starts over with a new girlfriend. After he is lured into the underworld, his younger brother tries to join him, forcing Mikey to choose between his family and his comfortable lifestyle.

The film Die Legende von Paul nd Paula (Germany / “The Legend of Paul and Paula / 1973 / Drama / Rated R-13 / 105 minutes) follows the story of a married bureaucrat and a single mother of two who go through divorces, sorrow and betrayals before finally ending up together.

An ex-con takes a job in a school that sits over his stash of cash from an old robbery in Suck Me Shakespeare (Germany / “Fack Ju Göhte” / 2013 / Romance, Comedy / Rated R-13 / 119 minutes). While secretly digging for his loot, the teacher Zeki brings the unruly kids of a class back on track with his drastic yet effective methods that gain the attention of his prim and proper fellow teacher, Lisi.

While vacationing on the Greek Isle of Love, a repressed 30 year old Stefania reluctantly plays chaperon to her precocious 14 year old niece, Meggy, who plans to lose her virginity before the summer is over. In Ginger and Cinnamon (Italy / “Dillo con parole mie” / 2003 / Drama / 105 minutes) they learn about love and family while stumbling upon an unexpected person.

Nine-year-old Finn (The Netherlands / 2013 / Family / Rated PG / 90 minutes) struggles to make music despite his father’s wishes for him to play football instead. An encounter with an old man who plays the violin so beautifully inspires him to go for what he wants. This movie has been featured in various festivals and gathered awards all over the world.

In Totally True Love (Norway / “Jørgen + Anne er Sant” / 2011 / Family / Rated PG / 83 minutes) ten-year-old Anne must fight for the affections of Jorgen, the new boy in her class, against the prettiest girl in school, Ellen.

This year is special as the Embassy of Poland based in Kuala Lumpur, for the first time, will participate with their two famous movies:

A young woman on the verge of taking her vows as a Catholic nun when she learns from her only living relative a dark family secret dating back to the years of the Nazi occupation – one of which is her real name: Ida (Poland / 2013 / Drama / 82 minutes).

When a wedding ceremony gets interrupted in the wake of Joseph Stalin’s death, a fine mime production ensues. Watch as it culminates into a raucous celebration with the twists and turns on Silent Wedding (Romania / “Nunta muta” / 2008 / Comedy, Drama / Rated R-13 / 87 minutes).

Ema is a beautiful and successful TV anchor of a national TV broadcaster, the star of an appreciated tabloid show. A perfectionist, she has no hesitation in putting at steak her health or money for higher ratings. One of her cases brings her in a middle of a huge scandal which will dramatically change her life. The film – Live (Romania / 2015 / Drama / Rated GP / 103 minutes) – asks, what can it be worse than loosing your personal life and finally your own identity?

The Corpse Must Die (Slovakia / “Mŕtvola musí zomrieť‘ / Comedy / Rated R-13 / 96 minutes) gives a peek into the different ways of love with the story of Kristof and Nada, husband and wife teachers whose actions towards a nymphomaniac student and a cheeky stranger begin a series of crazy events.

A film about the relationship between a troubled teenager and his grandfather, a military retiree living in a village on the Costa de la Luz, 15 años y un día (Spain / “15 Years and One Day” / 2013 / Drama /  Rated R-13 / 96 minutes) will show how the two will have to face their fears and limitations.

“We are excited to take part once again at this year’s Cine Europa film festival and to continue to bring the best of UK film to the Philippines. Addressing serious themes but typically British in its use of humour, Pride is a genuinely uplifting film that tells the true story of a friendship that was formed between two communities in unlikely and challenging circumstances. Please support Cine Europa and head to the cinemas this September-November 2015.“

Admission is FREE for all screenings at all locations for the two-month festival.

Other partners who have played a very important role in the film festival are JEC Philippines, Institut Francais, the Norwegian Film Institute and the Swiss Cultural Fund – Philippines.

I’m still deciding which films I will line up for. Hmm.. How about you dear reader? See you around? 🙂