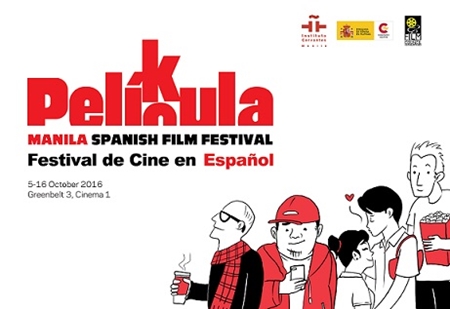 The best of contemporary Spain and Latin America cinema are featured on the 15th edition of PELíCULA-PELIKULA, the Manila Spanish Film Festival this October 5-16, 2016.

The festival kicks off on October 5 with opening ceremonies at Ayala Museum, followed by the invitational screening of the award-winning Spanish-Argentine film Truman (2015 / Comedy, Drama / 108 min) at Greenbelt 3. Julian receives an unexpected visit from his good friend Tomas, who lives in Canada. The two men, accompanied by Julian’s faithful dog, Truman, will share emotional and surprising moments prompted by Julian’s complicated situation.

One night changes Vicente’s life forever in Aquí no ha pasado nada (“Much Ado about Nothing” / Chile / 2016 / Drama / Rated R-18 / 105 min) when he becomes the main suspect of a hit-and-run incident that caused the death of a local fisherman.

Two young Spanish men, with a university education, are tired of unemployment and decide to move to Germany in the film Perdiendo el Norte (Spain / 2015 / Comedy / Rated R-7 / 102 min). But soon they will find out that finding a better living is not as easy as they expected.

The life of Diego, a young and successful photographer, turns upside down after a tragic accident. As his partner lies in a coma, Diego must care for the partner’s son and adapt to life together in Azul y no tan rosa (“My Straight Son”, “Blue and Not So Pink” / Venezuela / 2012 / Drama / Rated R-12 / 114 min).

A story full of suspense, A Esmorga (Spain / 2014 / Drama / Rated R-16 / 111 min) narrates twenty four hours in the life of three men, brothers in revelry, leaving behind a trail of destruction, of repressed and confused sex, closing doors behind them and throwing the keys away, as if deliberately heading for their own ruin.

5th July 2013. Old party treasurer, Luis Barcenas, is transferred from prison to National Court to testify. Up until now, in B, la película (Spain / 2015 / Drama / Rated G / 80 min), he’s denied any connection with the so-called Barcenas Paper’s. However, after 18 days in prison, he decides to change his statement.

A group of thieves led by a man called El Uruguayo stalk a bank in Valencia to steal as many safety boxes as possible in the Spanish-Argentine film Cien años de perdón (“To Steal From A Thief” / 2016 / Crime, Thriller / Rated R-16 / 97 min).

In Isla Bonita (Spain / 2015 / Comedy, Drama, Romance / Rated R-7 / 101 min), a veteran publicist going through a life crisis takes refuge on the island of Menorca. When he makes new friends, he gains a different perspective on life.

The film Mi gran noche (“My Big Night” / Spain / 2015 / Comedy / Rated R-18 / 100 min) is explored in distinct enclosed spaces – a TV studio and a bar – in which characters are forced into extreme but comical situations, they explore themes of deceit, betrayal and guilt.

A group of pets will have to muster all of their ingenuity, knowledge and efforts to save the Rainbow Forest which represents their dreams and their play area in La tropa de trapo en la selva del arcoiris (“The Happets in The Rainbow Forest” / Spain / 2014 / Animation / 75 min).

In a lonely spot, a boy flies a kite made by his father. It is windy and the boy needs an adult to help him untangle it from the bush to keep it flying. In the middle of nature, they tell a special tale – Un Día Perfecto para Volar (“A Perfect Day to Fly” / Spain / 2015 / Drama / Rated G / 70 min).

Las ovejas no pierden el tren (“Sidetracked” / Spain / 2014 / Comedy / Rated R-12 / 103 min) revolves around a couple in their 40s who have moved to the country attempt to navigate new directions in their lives, and find their daily routines entangled with surreal situations.

Filmed in stunning black-and-white, El Abrazo de la Serpiente (“Embrace of the Serpent” / Colombia / 2015 / Adventure, Drama / Rated R-13 / 125 min) centers on Karamakate, an Amazonian shaman and the last survivor of his people, and the two scientists who, over the course of 40 years, build a friendship with him.

Anacleto (Spain / 2015 / Action, Comedy / R-16 / 87 min) is based on a comic book series. The protagonist, Adolfo, a security guard, loses his girlfriend, becomes the target of a dangerous criminal, and learns his father is a secret agent. He is forced to leave his comfort zone to work with his father to survive.

In La Tierra y la Sombra (“Land and Shade” / Colombia / 2015 / Drama / Rated R-7 / 97 min), after having left a long time ago, a humble country sugar cane worker returns home to meet his grandson and deal with the hardships his family has been put into.

Sacromonte, los sabios de la tribu (“Sacromonte, The Wise of the Tribe” / Spain / 2014 / Documentary / Rated G / 94 min) recovers the memory of the most flamenco neighborhood in the world, through the survivors of a golden era, older men and women. Walk through the past to reconnect with their roots and their memories.

Recent short films from the Philippines, Mexico and Spain will be screened at the FDCP Cinematheque Manila on October 22.

The selection includes titles that have earned several awards and nominations in various national and internaytonal film festivals and have already been shown in more than 25 countries worldwide.

The fifties. The mayor of Benidorm has a problem. There is only one person who is able to solve it: Francisco Franco, the caudillo.

Five years ago the boss closed the company and fired 300 employees. The first day he goes jogging, he comes across one of them.

Two bankers who have sold a substantial amount of preferred shares have a conversation at a bar. One of them, the general manager, is suffering a protest; a group of victims guard his house and his family. After several sleepless nights, he finally has an epiphany.

What would you be willing to do in order to have a peaceful journey?

The audience are given stubs to rate the movies they have seen during the festival. For every five movies, they qualify for the raffle draw where they can win a round-trip ticket to Spain and other exciting prizes.

Tickets (P100) are available via SureSeats.com or at the cinema counters.

Selected films will also be screened at the Film Development Council of the Philippines (FDCP)’s Cinematheque in Baguio, Ilo-ilo and Davao.