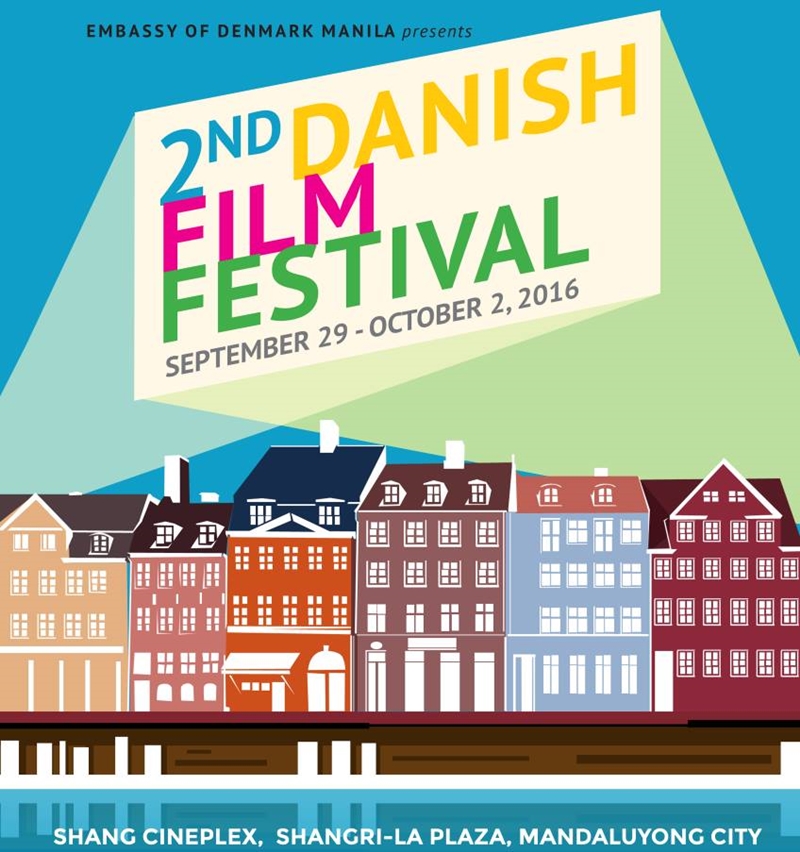 The 2nd Danish Film Festival in Manila opens September 29 and will run until October 2 at the Shang Cineplex.

This year’s festival highlights the celebration of 70 years of diplomatic relationship between Denmark and the Philippines by promoting cultural exchange through cinema. Moviegoers can expect eleven (11) finely curated films from the Embassy of Denmark in the Philippines, which will be screened for free.

Rosita (Drama, Romance / 90 min), starred by actress Mercedes Cabral, is featured during the festival. It is about a young Filipina who travels to Denmark to work as a translator for the middle-aged widower Ulrik. Rosita and Ulrik’s son, Johannes, start to grow more and more attracted to each other which forces Johannes to take responsibility for his dreams and his future.

In the sequel Antboy: Revenge of the Red Fury (Adventure, Fantasy / Rated Pg / 84 min), superhero Antboy finds his world thrown back into danger as a mysterious invisible enemy makes herself known as the Red Fury along with a band of new super villains. If that wasn’t bad enough, two-faced, new boy in school Christian even tries to steal away his crush.

The Idealist (Idealisten / Drama, Thriller / 114 min) is based on the 1968 nuclear crash in the US Military Air Base at Thule, Greenland. The case was dismissed as an accident, but 18 years later, a local reporter runs into suspicious circumstances that link back to the crash. This political thriller is a gripping film about uncovering the truth behind one of the government’s well-kept secrets.

Award-winning film director, Bille August, explores the dynamic of a family in an extraordinary situation in his film, the Silent Heart (Stille hjerte / Drama / 98 min). The family’s matriarch is diagnosed with a severe illness, and before it worsens, she expresses her desire to end her life and gathers her entire family to celebrate one last weekend together.

In The Keeper of Lost Causes (Kvinden i buret / Crime, Mystery, Thriller), chief detective Carl Mǿrck is assigned to Department Q, the newest department that handles old, terminated cases and there he meets his new assistant Assad. Although they were tasked to only read and sort through cases, Carl’s stubborn nature throws them headfirst to solve the mysterious disappearance of female politician, Merete Lynggaard.

In The Hour of the Lynx (I lossens time / Crime, Drama / 10 min), the priest Helen is approached by scientist Lisbeth to help a young man imprisoned in a high security psychiatric ward after being convicted of murder. Fearing that he might attempt suicide again, the priest and scientist begin a journey that takes them deeper into the sick mind of a young man’s soul.

The life of Jan and his struggles at work and in his marriage that’s on the verge of breakdown is at the center of film With Your Permission (Til døden os skiller / Comedy, Drama, Romance / 100 mins). When Jan is sent to group therapy by his boss, he forms an unlikely friendship with mechanics Rudy and Alf. Had he and wife Bente known what Rudy and Alf were really up to, they would never have welcomed them into their home.

Fear Me Not (Den du frygter / Drama, Thriller / 95 min) is a story of a man losing control over his own actions. Michael signs up for the clinical trial of a new anti-depressant. The trial was stopped as the pills turn out to have serious side effects, but Michael refused to give up his new-found sense of calm and self-control which the pills provided. As he continues with the experiment, his psychological games become more drastic and his actions even more terrifying.

The Candidate (Kandidaten / Thriller / 90 min) is about defense attorney, Jonas Bechmann, who is accused of murder. As he hunts for the group of blackmailers who are threatening to expose him as the killer, he finds links to his father’s death under mysterious circumstances.

Last but not the least, Karla’s World (Karla’s Kabale / Comedy, Drama, Family / 90 min) shows how 10-year old Karla tries to get her whole family together for Christmas although it’s not easy, because her parents are divorced and her two obnoxious yet inventive younger brothers are always acting up.

Admission is on a first-come, first-serve basis. Tickets will be released 30 minutes before the screening time. Schedules and films are subject to change without prior notice.

For more information visit Embassy of Denmark in the Philippines on Facebook or check out the 2nd Danish FIlm Festival Facebook event page. Use #DanishFilmFest when posting about this year’s event.