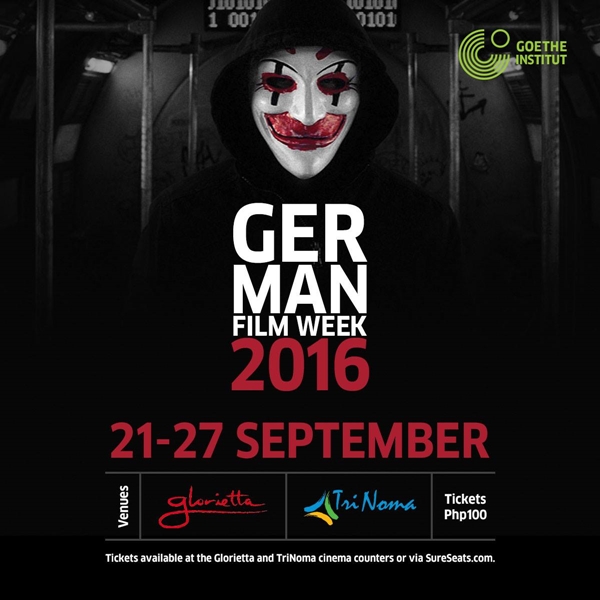 There’s a new “film festival” to look forward to this September from the Goethe-Institut Philippinen – the 1st German Film Week.

Goethe-Institut is screening thirteen (13) contemporary German films on September 22 to 27, 2016 at Glorietta and Trinoma cinemas. The first edition of the German Film Week showcases films with classic themes of love, loyalty, family, and adventure to the grittier issues of identity or coping with the past.

Who Am I – No System Is Safe (Who Am I – Kein System ist sicher / 2014 / Thriller / 15+ / 106 mins) is the festival’s opening film. A gifted hacker is recruited to the hacker collective CLAY, that become more and more famous with fun guerilla actions causing increasingly serious problems.

Berlinale 2015 awardee As We Were Dreaming (Als wir träumten / 2015 / Drama / 117 mins) tells the story of three guys from east Germany who are in love with techno music and decided to start their own club.

An intense adaptation of Martin Suter’s novel of the same name, a successful lawyer’s life turns upside down dealing with psychedelic mushrooms in Berlinale 2016 awardee The Dark Side Of The Moon (Die dunkie Seite del Mondes / 2015 / Crime, Thriller / 97 mins).

Head Full Of Honey (Honig im Kopf / 2014 / Comedy, Drama / 139 mins) is a story about the love between Tilda and her grandfather, who she takes a trip before he goes to a nursing home due to his Alzheimer’s.

Discover the magic of riding with rebellious Aylin along with her journey towards self-confidence and independence in the film Hördur : Between The Worlds (Hördur : Zwischen den Welten / 2015 / Drama / 84 mins).

I’m Off Then (Ich bin dann mal weg / 2015 / Comedy / 92 mins) is the film adaptation of Hape Karkeling’s best-selling book “I’m Off Then: Losing and Finding Myself on the Camino de Santiago”. Follow the protagonist’s journey as he goes on a pilgrimage on the St. James’ Way.

Labyrinth Of Lies (Im Labyrinth des Schweigens / 2014 / Drama, History / 123 mins) revolves around exposing the conspiracy of prominent German institutions and government branches to cover up the crimes of Nazis during World War II.

Fourteen year-old Maria is a fundamentalist Catholic. She goes through all 14 Stations Of The Cross (Kreuzweg / 2014 / Drama, Satire / 110 mins) to become a saint and go to heaven.

Another Berlinale 2016 awardee, Meteor Street (Meteorstraße / 2016 / 84 mins), reflects the current discourse around asylum and immigration in Germany and Europe.

Follow the chaotic journey of two teenagers in love at the start of the May 1968 revolution in Rough Road Ahead (Von jetzt an kein Zurück / 2014 / Drama, History / 109 mins).

WILD (2015 / Drama / 97 mins) is about an anarchist young woman who breaks the tacit contract with civilization and fearlessly decides on a life without hypocrisy or an obligatory safety net.

The 1st German Film Week is a joint project of Goethe-Institut Philippinen, Ayala Cinemas and Film Development Council of the Philippines. Tickets (P100) are available via SureSeats.com or at the cinema counters.

For more information visit Goethe-Institut on Facebook or the GFW 2016 Program. Use #GermanFilmWeekPH when posting about this year’s event.