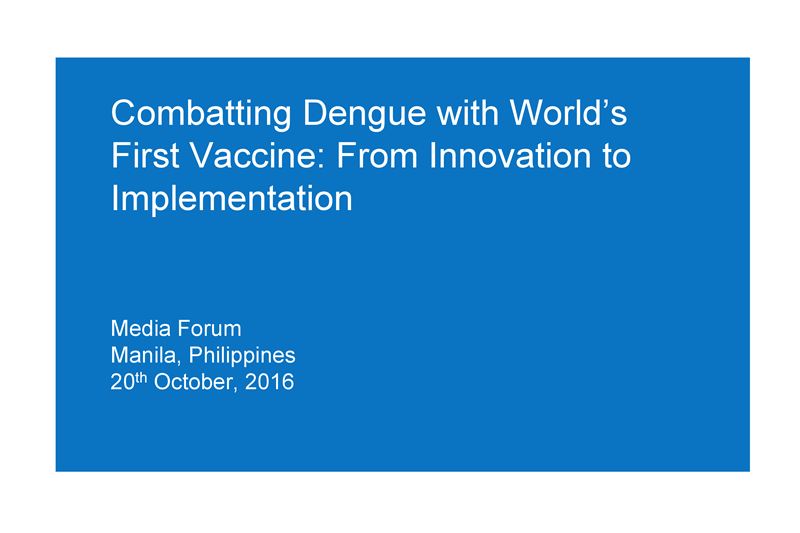 The first known epidemic of dengue hemorrhagic fever was recorded in Manila in 1953. Since then, dengue has become a year-round threat in the Philippines.

This mosquito-borne disease reported an average of 220 cases daily in 2015, half of this came from Region 3, Region 4 and the National Capital Region. Millions worldwide have died because there was no specific anti-viral treatment that exists. Instead, preventive measures are imposed to the public through maintaining cleanliness in one’s surroundings: proper waste disposal, removing artificial man-made mosquito habitats, covering and cleaning domestic water storage containers and using personal and household protection.

Through years of research, the world’s first dengue vaccine has been developed to help control this infectious disease. Here are some facts from a roundtable discussion I have recently attended, shared by Dr. Alain Bouckenooghe (head of Research and Development, Sanofi Pasteur) and Dr. Joshua Nealon (head of epidemiology for Asia Pacific, Sanofi Pasteur).

What is the name of the dengue vaccine and who manufactured it?

Sanofi Pasteur’s dengue vaccine, Dengvaxia (also referred to as CYD-TDV), is the first vaccine licensed for the prevention of dengue in the world.

Which countries carry the dengue vaccine?

Dengvaxia is currently registered in six countries (Brazil, Mexico, the Philippines, El Salvador, Costa Rica and Paraguay) and is also approved in Singapore, Guatemala, Peru, Indonesia, Thailand and Bolivia. Regulatory review processes for the dengue vaccine are continuing in other countries where dengue is a public health priority.

Which dengue strain/s does the vaccine address?

It is said to prevent the illness caused by any of the four (4) dengue virus serotypes in individuals aged 9 to 45, living in dengue endemic areas.

How is the dengue vaccine administered?

The dengue vaccine should be administered in a three dose regimen (0.5mL each) in a 0/6/12 month schedule. It is available in a single-dose vial or in a multi-dose (5-dose) vial. It is a freeze-dried product to be reconstituted before injection with either a sterile solution of 0.4% sodium chloride (for single-dose) or 0.9% sodium chloride (for 5-dose).

Who are not eligible for the dengue vaccine?

The vaccine is not recommended for use in: children below 9 years of age (consistent with current labeling) and in special populations such as pregnant and lactating women, HIV-infected or immunocompromised individuals, travelers and healthcare workers.

What is the Philippines’ role in the vaccine development?

The Department of Health announced on January 4, 2016 that one million (1M) nine-year-old Filipinos enrolled in government schools in Region 3, Region 4-A and the National Capital Region will be the first beneficiaries of the government-procured dengue vaccine.

The world’s first public dengue immunization program was launched in April 2016. From April to July 2016, 489,003 eligible children have already received their first of three doses.

In the recent dengue vaccine cost-effectiveness study performed by Professor Hilton Lam of the UP-National Institute of Health, this nationwide annual routine vaccination would lead to an estimated 24.2% reduction in dengue cases in the country over a five-year period. This would translate to 175,053 avoided cases of dengue, 502,000 avoided hospitalizations, 22,010 avoided deaths and almost Php21 billion in avoided cost to society.