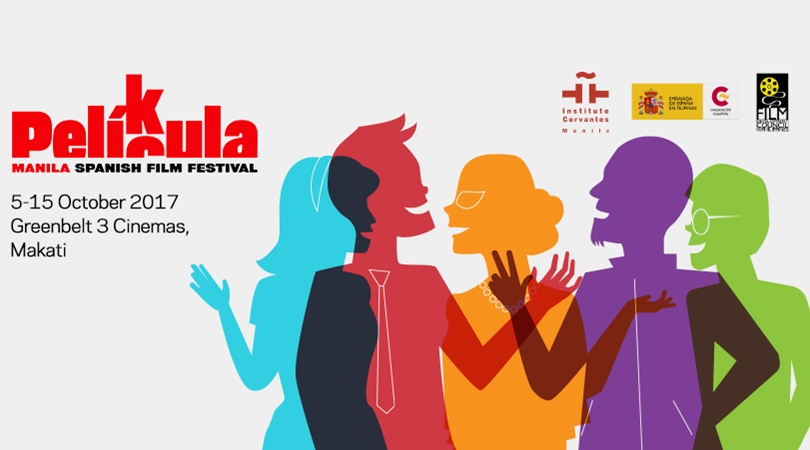 The 16th edition of Manila Spanish Film Festival is happening on October 5-15, 2017 at the Greenbelt 3 Cinema.

In December 1898, with the signing of the Treaty of Pris, Spain ceded sovereignty over Philippines to the United States. Meanwhile, a Spanish detachment was sieged in the village of Baler y Filipino revolutionary insurgents for 337 days without knowledge that the war was over.


Al final del túnel / At the End of the Tunnel

The life of Joaquin, a man in a wheelchair, seems to be improving since the day he rented one of the rooms in his house to Berta, a stripper, and her daughter Betty. Their presence makes the house happy and encourages Joaquin’s life. One night, while working in his basement, Joaquin realizes that a band of criminals are building a tunnel that passes under his house with the intention of robbing a nearby bank. Joaquin begins then to execute a plan against the clock in order to try to frustrate the intentions of the band.

In Argentina, Mozambique and the Philippines, three young boys have jobs that depress the but they start focusing in other elements and points of view of a world they did not perceive before, an ordinary and magical world at the same time.

It is 9 a.m. in a bar in the center of Madrid and different people who don’t know each other are having breakfast. It seems like a normal day. But when one of the clients leaves the bar, he gets a shot in the head just after stepping on the street. After that terrible event, the group of people who are inside are forced to remain, with the fear that the sniper shoots anyone who leaves the place. No one else dares to get out of there. They are trapped.

Daniel Mantovani, an Argentinean writer who won the Nobel Prize for Literature, left his town forty years ago and went to Europe, where he triumphed writing about life in his native town, Salas, and his characters. One day a letter from the mayor of Salas arrives inviting him to receive the distinction of “Illustrious Citizen” of the town and Mantovani, against all odds, decides to cancel his busy agenda and accept the invitation. In the village, upon his arrival, people do not receive him with the enthusiasm and affection he was expecting.

Antonio and Berths are an elderly couple in their nineties who find themselves in deep trouble when pensions are suspended due to a social and financial crisis in their country. Given they haven’t seen their two children for many years, the couple is confronted with the need to survive on their own and must face the hard reality of selling their belongings and peddling tamales on the street or turn to crime. The lives of the elderly couple change when their son Jonas and grandson Pack, absent for more than ten years, unexpectedly reappear in their lives.

Francisco Paesa, former secret agent responsible of one of the most important operations against ETA, is involved in a case of extortion in the middle of GAL crisis and has to flee the country. On his return, four years later, he is totally ruined. Under these circumstances he receives the visit of Luis Roldán, General Director of the Guardia Civil, who offers him a million dollars if he helps him saving 1.5 million pesetas substracted from the public treasury. In collaboration with his friend Jesús Camoes, Paesa designs a masterful plan.

In 1934 Diego Padilla wins the Spanish Chess Championship and meets Marianne Latour, a French journalist. They fall in love. At the end of the Civil War, they are forced to migrate to France with their daughter. There, he is accused of spying for the Nazis and is imprisoned. Diego survives hostility by playing chess with his warden, Col. Maier. Based on a true story.

A Japanese executive in Tokyo, whose life is based solely in his work for a big corporation; a Sub-Saharan community on Mount Gurugú, on the border between Africa and Europe, that risking their life again and again try to cross to the First World in the pursuit of a better life; a family in Madrid who, in spite of the efforts to have a life that the system understands like “normal”, end up evicted from its own home. Frágil equilibrio raises three stories of contradictions that take place in different parts of the world and in different socio-economic spheres, but which affect all us as humans.

Documentary about the traditional music, singing and dance of Aragón: the Jota. Directed by Carlos Saura, he proposes a tour from the most basic and most attached singings and dancings of Aragón, to those who advance the future of this type of music. A visual route with the intention of achieving a unique and historical document that serves as an assertion of this art.

Koblic tells the story of the Argentine Navy captain Tomás Kóblic, who during the last Argentine dictatorship participated in the “flights of death”, called so because the detainees were thrown alive to the sea. Tormented by that experience, Kóblic decides to abandon his comrades and flee to a town in the south of Argentina where he must begin a dangerous new life under the constant treat of the dictatorship.

Dulce is a mother of two who experiences terrifying encounters with apparitions inside her old house, a place where a tragedy occurs. Thirty years later, an elderly Dulce returns home to decipher the mystery that has tormented her for so long.

Five men are hired to paint the dividing line of a road that connects two towns in Mexico. On board of an old truck, they start a more than two hundred kilometers work that should be completed in less than fifteen days. Five lonely people who come together with the only purpose of earning a few pesos but, without looking for it, this trip will change their way of seeing and understanding life. At the end of the journey, they will learn that there is a thin line among good and evil; among laughter and tears; among life and death.

Eleven handcrafted, including a mason, a butcher, a seamstress and a cleaner, are hired to do their work in front of an audience of hundreds of people. Artwork, reality show, macabre experiment… they do not know where they are, nor who is the one leading that perverse play.

Isabel, an actress willing to do anything to recover her former glory, organized a dinner at her home. Her husband Angel, a screenwriter and his ex-wife, a film director, want to convince Diego Peretti, a famous Argentine actor, to star in their next film. But suddenly, something unexpected happens that baffles everyone.

A teenager who disappeared in a village on the border of the Catalan Pyrenees returns after eight years, when everyone considered him dead. The young man will be reunited with his family, strongly marked by the mystery of his disappearance. However, his identity is not clear and little by little more questions will be arisen about if it is really the missing child or an impostor.

Rosa is a prostitute just as her mother Antonia was. Now Antonia believes she is the glorious diva Sara Montiel, turning Rosa daily life into hell. Rosa does not know how to be happy. She just cannot be happy. However, the unexpected arrival of a new member to this particular family will give her a unique opportunity to do so.

Birdboy and Dinki are two teenage friends who struggle not to face reality and decide to escape from the island they live, a place devastated by an ecological catastrophe. Animated film adaptation of the same name novel written by Alberto Vázquez.


Que dios nos perdone / May God Save Us

Madrid, summer of 2011. A city hard hit by the economic crisis, receives a million and a half pilgrims waiting for the visit of Pope Benedict XVI. In this context, inspectors Velarde and Alfaro must find as quickly and confidentially as possible what appears to be a serial killer. This chase against the clock will make them realize something they had never thought of: neither of both is so different from the killer.

Bosco is a wealthy young man son of an important minister accused of corruption, embezzlement of public funds, money laundering and other economic crimes. Selfie tells how his life turns 180° and goes from living in a luxurious villa in the most expensive part of Madrid to having to look for a life in places he would never suspected he would go.

In a cinematic dialogue between Spain and the Philippines, Ta Acorda Ba Tu El Filipinas? Explores the traces of the overlapping waves of globalization from the past and the present. Switching between languages and scenarios across the complexity of the Philippines, the film intertwines the lives, struggles and memories of different speech communities: from the haunting voices recalling layers of history in the bustling district of Quiapo, Manila, to a camp for internally displaced persons in the Zamboanga province.

The film’s world premier is scheduled on October 6, 4:30PM, presented by director Sally Gutierrez, who will hold a Q&A session with the audience after the screening.


Tarde para la Ira / The Fury of a Patient Man

Madrid, August 2007. Curro enters prison after participating in the robbery of a jewelry store. He was the driver, and the only arrested for the Robert. Eight years later, he leaves prison with the desire to start a new life together with his girlfriend Ana and his son, but he will encounter with an unexpected situation and a stranger, José, who will take him through unknown paths near revenge.

A Spanish Army helicopter comes to the rescue of the wounded of a convoy attacked on a road in northern Afghanistan. Upon landing, the ground yields and the helicopter overturns, leaving everyone trapped in the middle of nowhere. As night falls, the Afghan insurgents are multiplying and haunting. The mission is to stay alive until dawn, in the hope that the rescue will arrive…

Short films from Spain will also be shown on October 13 at 4:30pm, within Cortos de España.

A collection of twelve short films about the city of San Sebastian, or inspired by it.

Luna is a security guard who works in the parking of some offices. Tired of her work and her boss, she turns with Diego, e.g. She barely sees for a few seconds a day. From a curious find, Luna will discover a way to communicate with her partner.

Tickets are available via SureSeats.com or at the cinema counters.

Don’t be just a spectator! Take part in the Audience Choice Award voting and get a chance to win a trip to Madrid, Spain! Watch, rate and get your ballot stamped for at least 5 films to qualify.