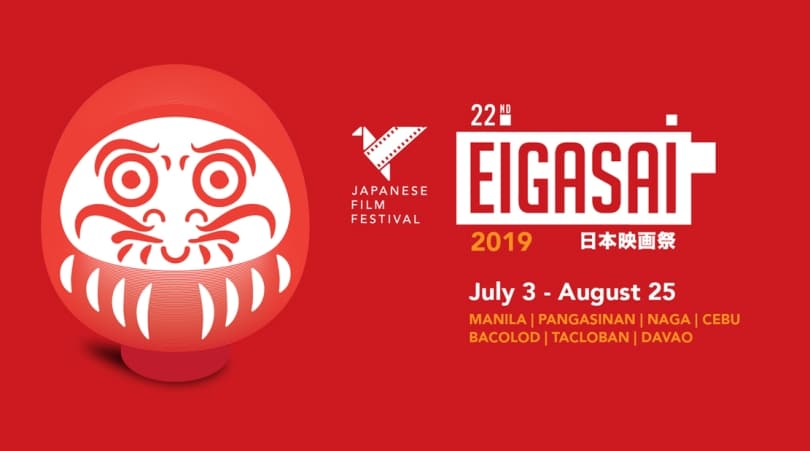 ­Seventeen (17) contemporary Japanese films will be shown over 135 screenings nationwide for the 22nd JFF | EIGASAI!

The Japan Foundation, Manila already released the details for its upcoming Japanese Film Festival, more commonly known as EIGASAI. The 22nd edition is scheduled from July 3 to August 25, 2019, with screenings at the following venues:

Majority of the 22nd JFF | EIGASAI line-up are drama films, some of which are mixed with action/adventure or comedy. Viewers can also look forward to two animation films, a mystery film as well as a zombie film.

The festival will officially open on June 3 with a screening of Samurai Marathon, which will be attended by its director, Bernard Rose. Expect a special performance by Tsugaru shamisen player Keisho Ohno during the opening week: July 4, 6PM at Gateway Mall and July 6, 4PM / 7PM at Shangri-La Plaza Grand Atrium.

Japanese Splash Cinema Best Film awardee Lying to Mom at the 31st Tokyo International Film Festival will be have screenings during the Cinemalaya Philippine Independent Film Festival this August 3 & 9, allied festival of JFF | EIGASAI. Director Katsumi Nojiri will be present at the Philippine premier on August 3.

The 22nd JFF | EIGASAI will also bring the critically-acclaimed film Shoplifters to UPFI for a special screening.

Annaka feudal lord Itakura Katsuakira (Hasegawa Hiroki) holds a run across mountain roads to get his samurai warriors into shape. However, the Bakufu central government views it as a rebellion and dispatches assassins to the castle. Meanwhile, Annaka domain accountant Karasawa Jinnai (Satoh Takeru) senses that something is amiss with the Bakufu.


2018 | Drama | Under 15s must be accompanied by adults | 2hr 6min | Color
In 1970, the Kansai region is jubilant over the World Expo in Osaka. Ethnic Korean Yong-gil (Kim Sang-ho) runs a yakiniku barbecue restaurant in a squatter settlement on government property. With a wife, three daughters and a son, he lives with bravado but is gradually bombarded by the tides of the times.

Film adaptation of the play that has been honored with numerous theater awards. Playwright Chon Wishing wrote the screenplay and makes his directorial debut with this film.


Nojiri Katsumi, who worked as an assistant director on The Great Passage and The Lies She Loved among others makes his directorial debut from his own original script.

The House Where The Mermaid Sleeps 人魚の眠る家


2018 | Drama, Mystery | 2hr | Color
Kazumasa (Nishijima Hidetoshi) and Kaoruko (Shinohara Ryoko) are in a troubled marriage and have agreed to divorce once their daughter’s elementary school entrance exams are over. However, just before they are to rehearse for a family oral interview, they are informed of their daughter drowning in a pool. Rushing to the hospital, Kazumasa and Kaoruko are met with a heartbreaking situation

Dwelling on his past glory as a prize-winning author, Ryota (Abe Hiroshi) wastes the money he makes as a private detective on gambling and can barely pay child support. After the death of his father, his aging mother (Kiki Kilin) and beautiful ex-wife (Maki Yoko) seem to be moving on with their lives. Renewing contact with his initially distrusting family, Ryota struggles to take back control of his existence and to find a lasting place in the life of his young son (Yoshizawa Taiyo) – until a stormy summer night offers them a chance to truly bond again.

Every year more than 1 million children die because they do not have access to clean drinking water. In Pandan, a rural village on the Panay Island, many people were suffering from kidney disease because they did not have access to clean drinking water. The project was started with the aim to solve this problem by building a 10 kilometer pipeline. Asuki (Tsuji Miyu), a college student, joins the project without giving it much thought when asked by a friend. After she arrives she quickly realizes things are worse than she expected. The labor is intense because they have no funds and the local people are hostile toward the Japanese. But amid the hardship, a five year old girl called Amy (Miel Espinosa) welcomes her kindly. The two become good friends through a picture book and Origami.

Hisashi (Satou Takeru) and Mai (Tsuchiya Tao) are engaged to be married and are completely happy, but Mai falls ill three months before their wedding. She has a cardiac arrest and falls into a coma, and Hisashi prays for her recovery. Mai gradually regains consciousness, but then another challenge awaits her.

Laughing Under The Clouds 曇天に笑う

Otsu in Shiga prefecture after the Meiji Restoration. This is the year for the resurrection of the Orochi snake demon that wreaks havoc on mankind, which happens once every 300 years. The three Kumo bothers consist of the oldest son Kumo Tenka (Fukushi Sota), who is in charge of the Kumo Shrine, followed by Soramaru (Nakayama Yuma) and Chutaro (Wakayama Kirato), and they rise up to block the snake demon.

The Crimes That Bind 祈りの幕が下りる時

A strangled female corpse is discovered in an apartment, and the apartment’s resident has vanished. The investigation hits rough waters, but soon they learn about female theater director Asai (Matsushima Nanako). Detective Matsumiya (Mizobata Junpei) forges ahead with the investigation while questioning whether a charred corpse discovered in the vicinity is related to the case, but then Kaga (Abe Hiroshi) learns of a fact that leaves him stunned.

Lu Over The Wall 夜明け告げるルーのうた

Middle school student Kai (voice: Shimoda Shouta) ends up in a declining fishing town as a result of his parent’s divorce. Depressed, he is one day invited by a classmate to join their band. Kai reluctantly goes to the practice site of Mermaid Island where he meets Lu (voice: Tani Kanin), a young mermaid.

Hyakkaou Private Academy is a common elite school for the rich – except that it has a peculiar tradition: gambling. Skill is all it takes under the rigerous hierarchy and the student council oversees all gambling activities. A transfer student Yumeko Jabami (Hamabe Minami), seemingly graceful but actually a “compulsive gambler” who finds pleasure in taking risks, gets entangled in the most intense gambling battles to win the position of student rep that the whole school is vying for.

Kun (voice: Kamishiraishi Moka), a spoiled little boy, has a new baby sister. Ever since her arrival, he misses his parents’ affection, and becomes jealous of her. Then one day, he encounters his sister Mirai (voice: Kuroki Haru) as a teenager, who came from the future, and embarks on a journey to know the story of his family and life.

Mirai is an animatied feature film produced by Studio Chizu. The film is originally written and directed by Mamoru Hosoda, who also directed The Girl Who Leapt Through Time, Summer Wars, Wolf Children, and The Boy and the Beast.

Tamako (Araguki Yui), who was once known as a “table tennis girl wonder”, was in a relationship with Ejima (Seto Joki), the ace of her company’s table tennis club, until another table tennis player, Airi (Nagano Mei), steals him away. Returning to her hometown, Tamako meets the members of the table tennis club her deceased mother operated, including Hagiwara (Eita), and together they begin practicing hard to defeat the pair of Ejima and Airi.

Misumi (Yakusho Koji), who had been previously convicted of murder, is once again indicted for killing and setting on fire the president of the company which laid him off. His lawyer, Shigemori (Fukuyuma Masaharu), begins investigating Misumi in order to file for life imprisonment instead of the death penalty. However, as his investgation continues, an uncomfortable feeling slowly develops within Shigemori.

One Cut of the Dead カメラを止めるな！

An indie film crew is shooting a zombie film in an abandoned building deep in the mountains. The uncompromisong director (Hamatsu Takayaki) drives the production relentlessly and gets to 42 takes. THen, real zombies appear and attack the crew, but the director is thrilled and keeps the camera rolling.

Architect Ayukawa Isuki (Iwata Takanori) is left paralyzed from the waist down by a sudden accident and is confined to using a wheel chair. Kawana Tsugumi (Sugisaki Hana) works at an interior design company who one day runs into the senior she had a crush on during high schol, Itsuki. Tsugami is charmed by Itsuki and endeavors to optimistically live life together.

Day-laborer father Shibata Osamu (Lily Franky) and his son Shota (Jyo Kairi) shoplift with brilliant teamwork. On the way home, they can’t bear the sight of a girl shivering in the cold on the first floor of an apartment block and they end up taking her home. The Shibatas have been enjoying themselves, but then a certain incident exposes the family’s secrets.

Screenings at Red Carpet, Shangri-la Plaza are priced at P100 each and may be purchased in any of the ticket booths or online: After The Storm – Kakegurui – Laughing Under The Clouds – Lu Over The Wall – Mirai – Mixed Doubles – One Cut of The Dead – Perfect World – Samurai Marathon – The 8-Year Engagement – The Crimes That Bind – The Tears of Malumpati – The Third Murder – Yakiniku Dragon.

Screenings at all other venues are free of charge on a first-come first-served basis.

Note: screening schedule as of June 7, 2019; arranged by show dates; subject to change without prior notice.

Dear reader, which films this 22nd JFF | EIGASAI run are you looking forward to watch on the big screen?

Do follow the official JFF | EIGASAI Facebook page for updates and use the hashtag #eigasaiph on your social media updates. See you at the cinemas! 🙂